When set, Rohit Sharma is most dangerous batsman in India, says Dinesh Lad 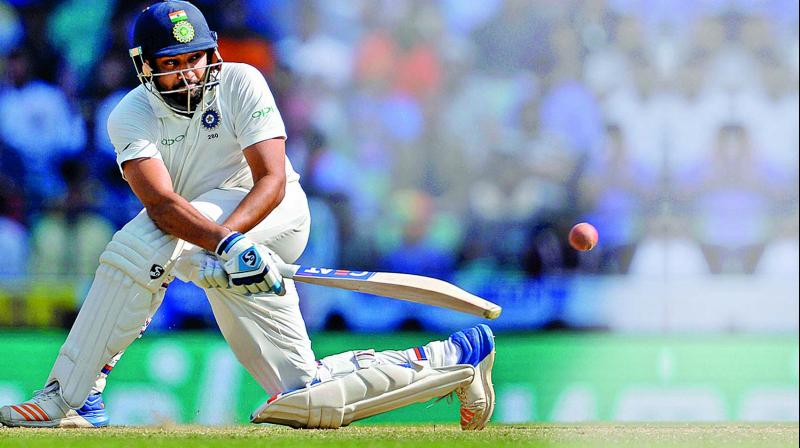 He is currently one of the most dangerous opening batsmen in the world.

Rohit Sharma has amazed many with a record three double hundreds in ODIs and a 35-ball Twenty20 hundred against Sri Lanka on Friday. The opening Indian batsman in limited overs cricket may not be a power-hitter like Chris Gayle but he is setting the stadiums on fire with fours and sixes. He equaled South African batsman David Miller’s record of hitting fastest T20I ton in 35 balls on Friday.

His school coach in Swami Vivekanand International School, Dinesh Lad, is not surprised with Rohit’s big and quick knocks in limited overs cricket. Of Rohit’s 16 ODI centuries, five have been in excess of 150 and four between 137 and 147. He scored 43-ball 118 in Indore on Friday before being dismissed in the 13th over. He also became first Indian to score two tons in T20Is.

“When he is set, he is India’s most dangerous batsman. His confidence level is high and he is hitting technically proper shots from coaching book manual. His face goes with the ball and gives proper elevation to his shots,” Lad said.

Lad who has also coached the likes of his son Siddhesh Lad and Harmeet Singh, who went on to play for Mumbai, admitted the opening slot suits Rohit’s style of play. Rohit’s career graph made a steep ascent ever since he was promoted to the opener’s slot in 2013. He has been consistent and scored all his hundreds in that position. His batting average has also vastly improved. He is currently one of the most dangerous opening batsmen in the world. “He used to open for his school and when he was asked to open for India his confidence grew up. He plays late with straight bat and close to the ball. His timing is superb, plays with middle of the bat and bisects the field easily. He makes optimum use of fielding restrictions,” Lad added.

Ever since Rohit has taken captaincy from regular skipper Virat Kohli in ODIs and Twenty20s for the ongoing bilateral series against Sri Lanka he has scored a ODI double hundred in Mohali and joint fastest Twenty20 hundred on Friday.

“He had the confidence to captain a side as he has led Mumbai Indians to (three) IPL titles. He has taken bit more responsibility here. During innings of (unbeaten) 208 he ensured he stayed at the wicket,” Lad said.

The stylish Mumbai batsman will be in action at Wankhede stadium on Sunday in the concluding T20 match against Sri Lanka. The 30-year-old hasn’t set his home stadium on fire yet. In five limited overs matches he played in Mumbai (ODIs 2, T20Is 3) his highest is 43 during the World Twenty20 2016 semi-final against West Indies.

“He is in good form and he will do well in Mumbai as well,” Lad hoped.