The tourists, facing a heavy defeat, were already grappling with a personnel crisis after Liton Das and Nayeem Hasan were hit on the head. 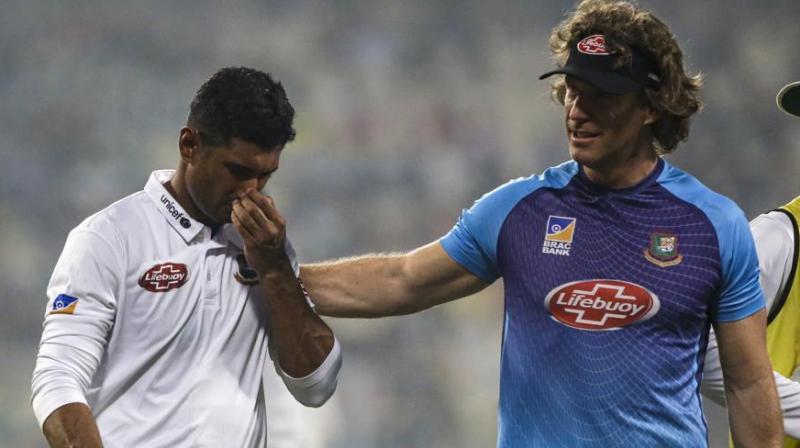 Two more Bangladesh batsmen sustained sickening blows to the helmet on Saturday, raising questions about the visibility of the pink ball used for their maiden day-night test against India at Kolkata’s Eden Gardens. (Photo:AP/Bikas Das)

Kolkata: Two more Bangladesh batsmen sustained sickening blows to the helmet on Saturday, raising questions about the visibility of the pink ball used for their maiden day-night test against India at Kolkata’s Eden Gardens.

The tourists, facing a heavy defeat, were already grappling with a personnel crisis after Liton Das and Nayeem Hasan were hit on the head by short deliveries from Mohammed Shami in their first innings on Friday.

That forced Bangladesh to bring in Mehidy Hasan Miraz and Taijul Islam as concussion substitutes.

On Saturday, Mohammad Mithun was smacked on the helmet by an Ishant Sharma delivery, while Mushfiqur Rahim, whose unbeaten 59 helped them avoid a defeat inside two days, was hit by an Umesh Yadav lifter.

“I thought lights and pink ball had a role to play,” India’s top order batsman Cheteshwar Pujara said after the second day.

“For a batsman, it’s not easy to pick the ball, especially short balls considering the kind of pace our fast bowlers have.

“Their batters, as far as I know, have not played any first class game with pink ball. So it’s not easy.

“First session is slightly easier to bat. Under lights, the ball starts swinging a little more. It’s easier to see the ball in sunlight, whether it’s red or pink.”

Bangladesh finished day two on 152-6, needing to score 89 more to make India bat against and avoid an innings defeat. India are 1-0 up in the two-test series.

Bangladesh quick Al-Amin Hossain, however, dismissed suggestions that the tourists were not technically equipped to deal with the pink ball.

“I don’t think there is any problem with the technique of our batsmen,” he said. “One can always get hit in the head. I don’t think visibility is an issue either, because when I batted, I had no problem seeing the ball.”

Compounding Bangladesh’s problem, Mahmudullah, who made a gutsy 39 and resisted India’s victory charge during a dour partnership with Mushfiqur, had to retire hurt with a hamstring injury.

“Mahmudullah will be assessed again tomorrow. We’re hoping he will be able to bat,” a team spokesman said, adding that neither Mithun nor Mushfiqur had shown any initial symptoms of concussion.