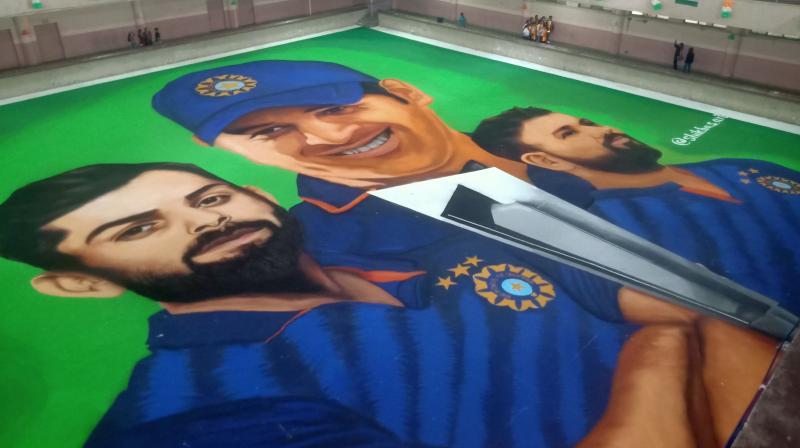 A 7400 sq.ft. big 'rangoli' of Indian cricketers on the eve of India vs Pakistan cricket match at ICC Men's T20 World Cup, in Indore. (Photo: PTI)

Indore: Indore artist along with her team has made 7,700 square feet rangoli to cheer the team India ahead of their first match in the T20 World Cup.

While speaking to ANI, Shikha Sharma, who led the team of artists, said, "We have made a rangoli of 7,700 square feet. We are a team of 20 people. This rangoli took 45 hours."

"Prior to this, I have made four world records. We have used 3 quintals of colours while making this rangoli. We have made MS Dhoni, Rohit Sharma, and Virat Kohli. We are cheering for the team India," she added.

The high octane clash will be played on Sunday between arch-rivals India and Pakistan. It will be after two years that these two teams will battle it out on the cricket field, after having last played in the men's ODI World Cup in 2019.

Having played the IPL in the UAE, the Indian players know the conditions well and will definitely hold an edge come Sunday. It is an encounter that tests a player's mental toughness.