Fans flooded the BCCI's post by acknowledging Dhoni, Sreesanth and the rest of the team members who lifted the 2007 T20 World Cup. 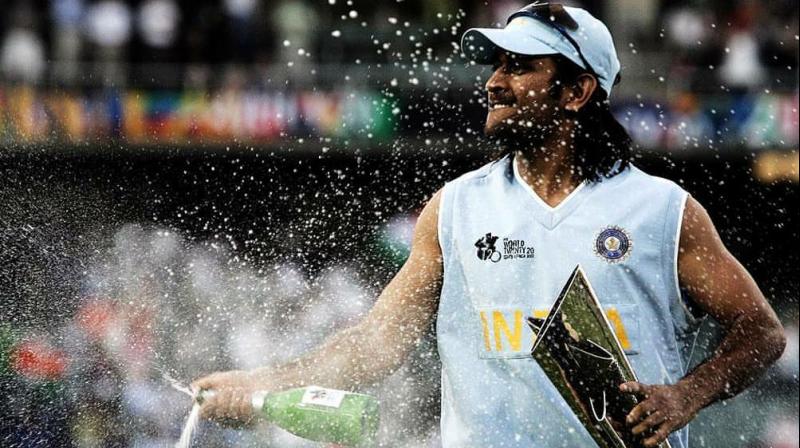 MS Dhoni-led Team India defeated Pakistan to triumph in the inaugural edition of the ICC T20 World Cup on this day in 2007.

The Board of Control for Cricket in India (BCCI) shared a video of the final moments of the epic encounter in Johannesburg where the Men in Blue defeated arch-rivals Pakistan by a slender margin of five runs.

"This day, in 2007 #TeamIndia were crowned World T20 Champions," the BCCI captioned the video on Twitter.

After electing to bat first, Gautam Gambhir's impressive 75-run knock propelled India to post 157/5 on the scoreboard in their allotted 20 overs. While chasing a competitive total, Pakistan lost wickets at regular intervals but middle-order batsman Misbah-ul-Haq kept their hopes alive until the final over.

Dhoni decided to give the final over to Joginder Sharma. Misbah had dispatched the second ball off the final over for a six and Pakistan was just 6 runs away from the target.

However, Misbah played a horrendous shot as he went for a scoop over short fine-leg but he ended up handing a simple catch to S Sreesanth to help India clinch the 2007 T20 World Cup trophy.

Fans flooded the BCCI's post by acknowledging Dhoni, Sreesanth and the rest of the team members who lifted the 2007 T20 World Cup.

& a boy from Ranchi went on to become a legend from just a boy with long hair from a small town rumoured to be drinking 2ltrs milk everyday.

Along with the Indian cricket team , Dhoni's journey to become a legend has been the most remarkable thing to witness 👏

Start Of Undisputed Era Of MSDhoni

Dhoni, who has retired from Test cricket in 2014 is currently on a break from cricket since India's exit from the ICC World Cup 2019 semi-final. The 38-year-old missed the West Indies tour and home series against South Africa.