According to many cricketers and experts, the ICC’s boundary-count rule was an 'unfair rule'. 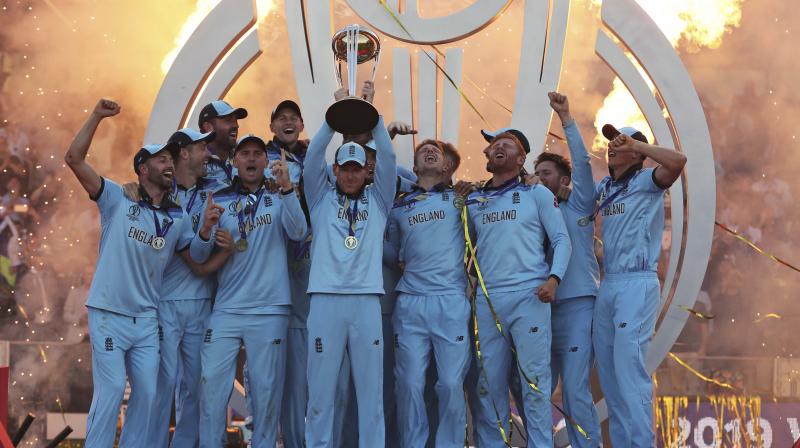 During the 2019 World Cup, the Decision Review System (DRS) also drew heavy flak following a bulk of incorrect decisions and Chappell felt that the DRS should be taken by the umpires than the players. (Photo:AP)

Mumbai: Ex-Aussie captain Ian Chappell believes that team’s position after league phase can be considered to determine the World Cup Winner in case there is a tie. New Zealand lost the World Cup final by a whisker as England defeated the Kiwis on the basis of boundary-count rule at the end of the super-over.

After the loss, the Blackcaps found it hard to deal with the loss, especially after both the teams got tied at 241. But, the ICC decided to award England as the World Cup Champions on the basis of the boundary-count rule. England had 22 boundaries and two sixes while New Zealand had 17 boundaries at the end of the 50-over and the super-over.

According to many cricketers and experts, the ICC’s boundary-count rule was an “unfair rule” as players, including Rohit Sharma, Gautam Gambhir and Yuvraj Singh questioned ICC regarding the "unfair rule".

“The ideal way to unravel a tied final is to consider the position of the two competing teams on the table at the end of the preliminary rounds,” Chappell told ESPNcricinfo. “This provides a definitive answer as the teams are placed in that order either by virtue of the number of wins or by a net run-rate tie-breaker.”

“If the Super Over doesn’t provide an outright winner then this is the least controversial way to decide a winner. England would still have won under this system, and they also comfortably defeated New Zealand in their round match.”

During the 2019 World Cup, the Decision Review System (DRS) also drew heavy flak following a bulk of incorrect decisions and Chappell felt that the DRS should be taken by the umpires than the players.

“A thorough overhaul of the DRS should place it in the hands of the umpires and not the players. And if the ICC was really serious about fairness in the decision-making process, they, and not than the television company that’s providing the coverage, would be in total charge of the technology,” he wrote in the ESPNcricinfo coulun. “That way every series would be played utilising the exact same technology, and therefore, under the same set of laws.”

After providing a brief review of the World Cup, the former Australian captain said the global cricket body must take some strict initiatives on the dimensions of the bat and ball to maintain a good balance between the bat and the ball.

“That an even balance between bat and ball needs to be maintained as much as possible; this will require tough decisions to be taken on bats and boundaries, and an assurance that pitches provide some encouragement for the bowlers.