The ICC decided to award England as the World Cup Champions on the basis of the boundary-count rule at the end of the super-over. 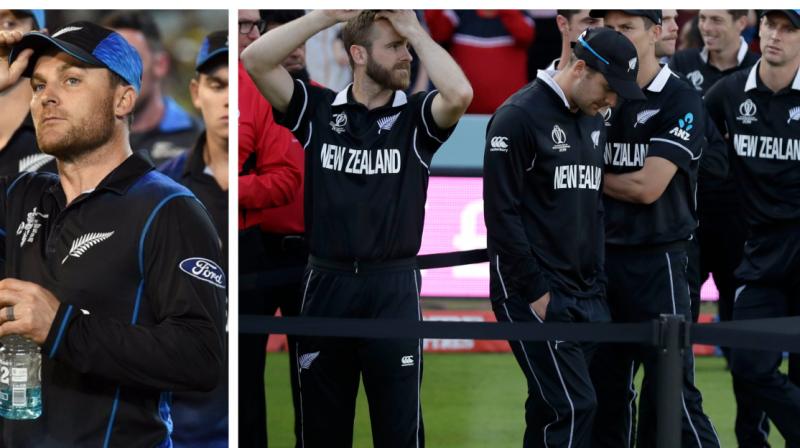 Former New Zealand captain Brendon McCullum revealed that he found it easier to move on as the 2015 final match wasn’t as close like the 2019 final match. (Photo:AP/AFP)

Mumbai: New Zealand lost the World Cup final by a whisker as England defeated the Kiwis on the basis of boundary-count rule at the end of the super-over. After the loss, the Blackcaps found it hard to deal with the loss, especially after both the teams got tied at 241.

But, the ICC decided to award England as the World Cup Champions on the basis of the boundary-count rule, which was an “unfair rule” according to many cricketers and experts. Moreover, the way the ICC handled the ‘overthrow runs’ part, totally killed the sportsman spirit of the game.

Sri Lanka umpire Kumar Dharmasena by mistake decided to award England extra four after the ball ricocheted off the bat of Ben Stokes. Meanwhile, according to the laws of ICC, the 19.8 section lays down the rule that if a ball gets deflected by an object then the delivery shouldn’t be counted (or should be called a dead ball).

But, Kumar Dharmasena defied the laws as he awarded England six runs instead of five when the ball was thrown, Adil Rashid didn’t reach the non striker’s crease, and, that should have been five runs instead of six, but Dharmasena awarded extra four runs.

The whole episode left the Blackcaps stunned as the unit couldn’t deal with the way the unit lost the match. In the middle of this, former New Zealand captain Brendon McCullum revealed that he found it easier to move on as the 2015 final match wasn’t as close like the 2019 final match.

"It's a bit different [from 2015] but I thought they've handled themselves magnificently in the aftermath of that result. Yes, it would've been lovely to have been a World Cup champion but I've always said the game doesn't define you but it's the person and character you are. I was so pleased with how our team handled that loss, also the success throughout that tournament.”

"That's the thing and it's going to be so difficult for those guys. I was lucky enough to have a beer with them in the changing room and they were pretty broken, that's for sure," McCullum said.

The 2015 World Cup finalist wicket-keeper also stated that someday the players would realize that they had played wonderfully in what could be one of the greatest and the most memorable World cup final ever despite the loss which could be hard to digest.

"They were also really proud of what they did and how well they played. Over the coming months and years, whilst it's still raw now, they'll understand just how magnificent that spectacle was. And for it to happen on the biggest of stages, to have played the hand that they played in that match is absolutely amazing," he told Stuff.

"It was a missed opportunity but I looked at the positives of the rest of the World Cup and what it did for the game in our country rather than focusing on that last moment," McCullum mentioned regarding the 2015 final.