Roy was instrumental during England's first-ever 50-over World Cup victory. 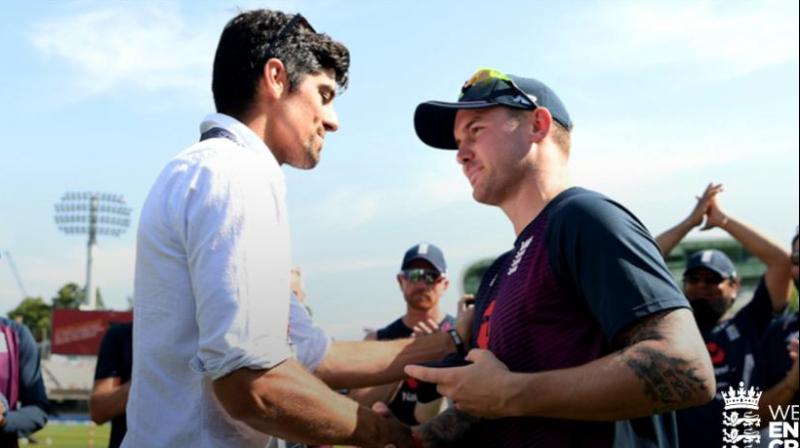 England Cricket in a tweet conveyed congratulations to both Roy and Stone on becoming Test cricketers. (Photo: England Cricket/Twitter)

Roy was instrumental during England's first-ever 50-over World Cup victory. The team led by Eoin Morgan defeated New Zealand on the basis of boundary countback rule on July 14 as the 50-over match and the subsequent super-over could not separate the teams.

Ashley Giles, the former England cricketer, did the honours for uncapped Olly Stone. The right-arm fast bowler Stone will be wearing whites for England after recovering from a back injury that forced him to return home during England's tour of the Caribbean earlier this year.

England Cricket in a tweet conveyed congratulations to both Roy and Stone on becoming Test cricketers.

England pacer Jimmy Anderson on Tuesday was ruled out of the one-off Test against Ireland after not being able to recover from a calf injury. The absence of Anderson benefitted Stone, who found a spot in the 11-man squad.

The one-off Test is underway at the Lord's Cricket Ground. England won the toss and elected to bat first. The hosts had a horror start and are currently at 55 for the loss of seven after 16 overs.