Sports   Cricket  24 May 2019  West Indies to be an aggressive but unpredictable team at the World Cup
Sports, Cricket

Throughout their struggles at test level in recent decades, however, they have remained a dynamic 20-over outfit. 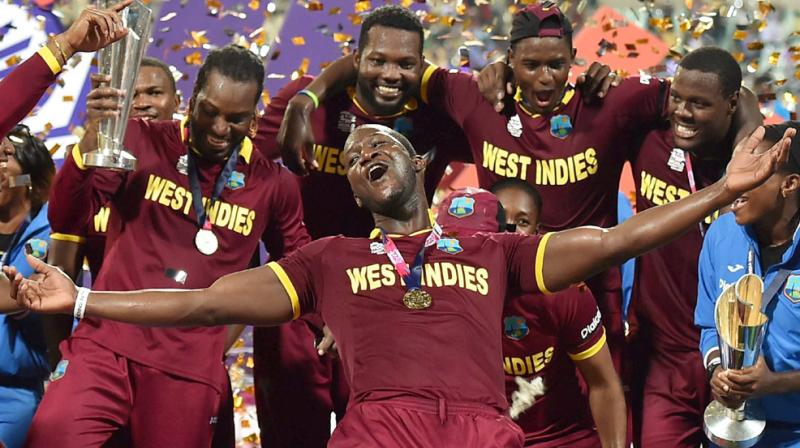 The winners of the first two World Cups back in the 1970s, West Indies have not made the final since 1983 as the well-documented decline in Caribbean cricketing fortunes played out. (Photo: AFP)

The once mighty West Indies struggled to qualify for the Cricket World Cup last year but their fortunes are on the upswing and they will arrive in England a dangerous and unpredictable outfit that nobody will be keen to play.

The winners of the first two World Cups back in the 1970s, West Indies have not made the final since 1983 as the well-documented decline in Caribbean cricketing fortunes played out.

Throughout their struggles at test level in recent decades, however, they have remained a dynamic 20-over outfit, winning the 2012 and 2016 World Twenty20 tournaments.

The recent return of some of their best players following the resolution of a long-running pay dispute with West Indies board has provided a big boost and they certainly do not lack batting firepower.

Chris Gayle and Andre Russell are particularly important returnees, both potential match-winners coming off magnificent Indian Premier League campaigns where they lit up the subcontinent with breathtaking performances.

Crowd-pleasing opening batsman Gayle, still going strong at the age of 39, showed he had lost none of his power as he slogged no fewer than 34 sixes for Punjab.

He will be vice-captain of the Jason Holder-led team at his fifth World Cup — his one-day international swansong — and enters the event by far the most experienced player in the squad with 10,151 runs in 289 ODIs.

“As a senior player, it is my responsibility to support the captain and everyone else in the team,” he said.

“This will probably be the biggest World Cup, so there will be great expectations and I know we will do very well for the people of the West Indies.”

All-rounder Russell was even more destructive with the bat in IPL, smashing 52 sixes and scoring at a strike rate of more than 200 for Kolkata, both best in the league.

Interim West Indies head coach Floyd Reifer expects another high-scoring World Cup and thinks the bowling will be the difference between the top teams and the also-rans.

“The team that bowls the best and fields the best will win the World Cup,” Reifer said recently.

“We expect the World Cup to be very high scoring. The pitches are (expected to be) very good for batting, so batters are expected to score runs.”

West Indies open their campaign against Pakistan at Trent Bridge on May 31.