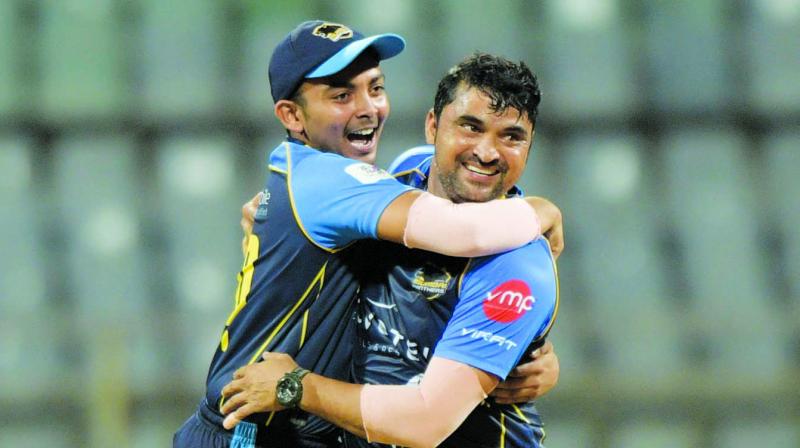 With this win, Panthers finished league engagements with six points from five games. For Triumph Knights it was third loss in five games and their fate in Group A now depends on Thursday’s results.

Riding on Sairaj Patil’s unbeaten 59 and Shaw’s 23, Panthers made 153/6. Patil shared 64-run partnership with Swapnil Salvi for the fifth wicket. Royston Dias (2/34) continued his impressive tournament by being effective with the ball again for Triumph Knights. Surya and Co struggled while batting and could muster only 109/7 with Akash Parkar top scoring with unbeaten 20. None of their batsman could stay at the crease for long including Suryakumar (14). The 47-year-old leg-spinner Pravin Tambe (2/17) and seamer Atif Attarwala (2/31) picked two wickets apiece. Patil also took three catches in the field to play lead role in team’s win led by 19-year-old Shaw.

SoBo SuperSonics bounced back in no time after suffering a maiden loss to overpower a depleted Shivaji Park Lions. Captain Jay Bista (33) and experienced Yogesh Takawale (40) held the SuperSonics innings together before the final flourish took their total to 150 for six.

And a struggling Shivaji Park Lions, yet again, crumbled under chasing a target to eventually be bundled out for 115 in the last over. The Lions saw their forgettable campaign moving from bad to worse, having suffered four losses in as many outings and being the only winless team in the tournament.

With Lions fielding an XI without their captain Siddhesh Lad and star all-rounder Shivam Dube, it was a humongous task for stand-in skipper Raunaq Sharma to restrict a well-oiled SuperSonics’ line-up. While the Lions bowlers did reasonably well despite Bista and Takawale’s knocks, the SuperSonics took the game away by plundering 52 runs off the last four overs to shift the momentum.