Brendon McCullum inspired England’s transformation in the wake of their embarrassingly early exit from 2015 World Cup. 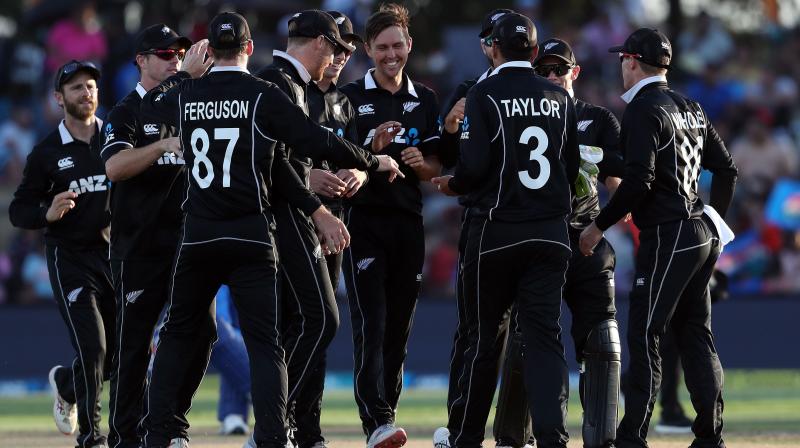 Gary Stead modified the all-out attack with the bat that propelled New Zealand to their maiden World Cup final four years ago for this year’s tournament after a successor to Brendon McCullum failed to emerge. (Photo: AFP)

Wellington: The all-out attack with the bat that propelled New Zealand to their maiden World Cup final four years ago has been modified by coach Gary Stead for this year’s tournament after a successor to Brendon McCullum failed to emerge.

McCullum, who captained the side in 2015 and retired a year later, helped New Zealand redefine the way one-day cricket was played and inspired England’s transformation in the wake of their embarrassingly early exit from that tournament.

The Black Caps, however, have apparently abandoned the tactic of attacking from ball one largely because of a lack of an opening batsmen who can produce the sort of assault McCullum was able to.

Colin Munro’s failure to replicate his Twenty20 form in the longer format must be at least partly responsible for the tactical switch.

The left-hander is only one of three players to have scored three or more Twenty20 international centuries and has a world class average of 33.59. However, he has yet to pass three figures in 51 one-day internationals, where he averages just 24.91.

He has also been dismissed for single figures in 10 of his last 21 innings, prompting Stead to promote Henry Nicholls to open with Martin Guptill in most recent matches.

Another hint at the change in tactical focus was the recall of Tom Blundell from the international wilderness as a second wicketkeeper at the expense of Tim Seifert.

The agressive Seifert can float up and down the order and has opened in Twenty20 internationals but failed to convince with the gloves.

There is still some top quality batting in the line-up with captain Kane Williamson and Ross Taylor able to build a platform which allows power-hitting all-rounders James Neesham and Colin de Grandhomme to provide the fireworks at the death.

Conditions at the tournament are expected to be batsmen-friendly after 300 runs were scored on 28 occasions, and 400 three times, in ODIs in England over the last four years.

Bowling sides out will therefore be imperative from their opener against Sri Lanka in Cardiff on June 1 if Williamson’s team are to advance out of the 10-team round-robin format and make their eighth semi-final.

“The word is it will be a high-scoring World Cup, but the best chance with the ball is certainly if we can bowl teams out and be aggressive in that,” Stead said.

“I think that will be a critical factor.”

That responsibility will rest largely on the shoulders of Trent Boult, the joint highest wicket-taker at the last World Cup with 22, with the quick looking to exploit what seam and swing he can extract from the wickets.

There is, however, a huge question mark over his new ball partner Tim Southee, whose performances in the format are on a downward trajectory.

Virtually unplayable when he destroyed England with 7-33 at Wellington four years ago, Southee has played just 45 of New Zealand’s 76 games since the last World Cup.

His 51 wickets since have come at a cost of 41.46 runs each making his place in the expected three-pronged pace attack with Boult, Lockie Ferguson or Matt Henry far from assured.