ICC World Cup: India look to sort no 4 position when they face NZ in pre-WC match

Kohli's men will start the tournament among the favourites alongside England and Australia. 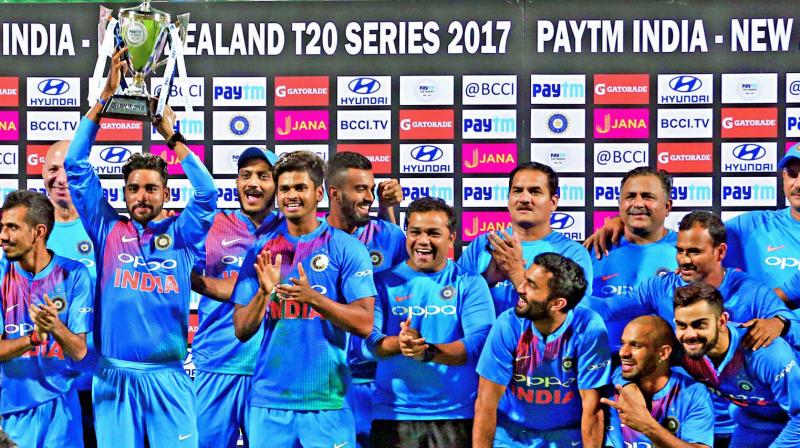 The outing at the Kennigton Oval will go beyond experimenting with their highly skilled bowling attack, and quite a bit of focus will be on K L Rahul and Vijay Shankar, contenders for the number four slot. (Photo: PTI)

London: Armed with pedigree, personnel and form, favourites India will look to hit the ground running when they face New Zealand in their opening warm-up game of the World Cup here Saturday.

However, with India yet to clear the haze of confusion over the number four position, it will be much more than a ritual of allowing one top-order batsman after another -- behemoths in their own right -- a hit in the middle.

The outing at the Kennigton Oval will go beyond experimenting with their highly skilled bowling attack, and quite a bit of focus will be on K L Rahul and Vijay Shankar, contenders for the number four slot.

Dubbed the most challenging World Cup ever owing to a format that is a throwback to the 1992 edition, Virat Kohli's team still arrived at the United Kingdom confident of adding to its two titles in the International Cricket Council's (ICC) showpiece event.

Kohli's men, second behind England in the one-day international rankings, will start the tournament among the favourites alongside the host nation and defending champions Australia.

They begin their campaign in tournament proper against South Africa in Southampton on June 5, but India will get their first feel of the mega event in the iconic British capital.

While the arch lights will be firmly trained on their talismanic skipper, the number one batsman in 50-over as well as Test cricket, India, and their opponents, would also keenly watch their fancied pace attack that is a mix of speed and guile.

In Rohit Sharma and Shikhar Dhawan as openers followed by Virat Kohli, India have one of the finest and potent top three in the world. Veteran Mahendra Singh Dhoni, all-rounder Kedar Jadhav and the big-hitting Hardik Pandya provide depth to the line-up.

Opponents will observe the ability of India's seamers to exploit the conditions, which could be the most important factor going ahead.

Jasprit Bumrah, the top-ranked ODI bowler in the world, leads the pace battery alongside Mohammed Shami, Bhuvneshwar Kumar and Hardik.

The seasoned Ross Taylor, one of the finest limited overs batsmen in recent years, had said it was good that New Zealand were playing India in the practice game. The reverse also holds true for India, as New Zealand offers them the kind of challenge that could make Kohli's team battle-hardened.

Kohli has expressed confidence in his side's ability to live up to the billing, while his counterpart Kane Williamson also expressed how pleased he was to have the squad back together, with New Zealand having last played an ODI on February 19 against Bangladesh.

"It's been great get together for the last few days. We've not played together for a couple of months but we're not the only ones in that boat. The guys are excited to be back in camp which is really refreshing, and we're looking forward to the challenges that we have got coming up," Williamson had said at the Captain's meet.