Chahal and Yadav have scripted India's success story in the ODI format on many occasions in recent times. 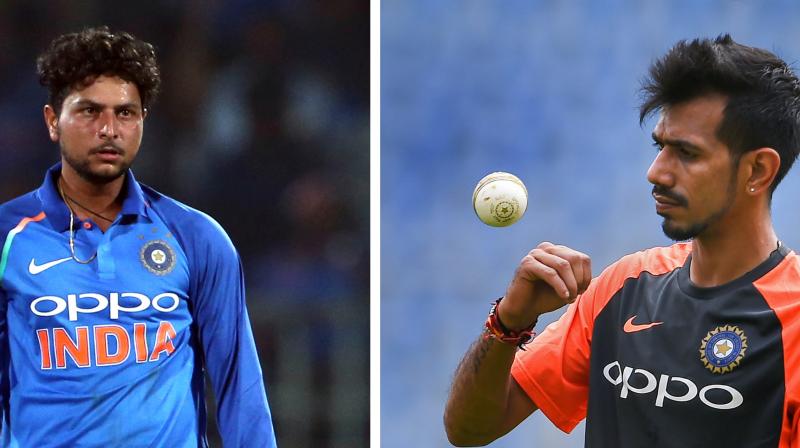 Mumbai: Two young spinners-- Yuzvendra Chahal and Kuldeep Yadav have now replaced Ashwin and Jadeja in the spin department of the national side. The wrist spinner duo managed to impress the world with their splendid strike rate and economy, along with the ability to turn the game in the middle overs.

But the main question is -- Who amidst the two will play a vital role in India's pursuit of third World Cup trophy?

The spin duo has scripted India's success story in the ODI format on many occasions in recent times. The spinners will play a crucial role by performing in summer conditions of England in World Cup 2019. Skipper Virat Kohli lauded the duo by addressing the spinners as pillars of India's bowling attack.

Yuzvendra Chahal has been successful in overshadowing Ashwin and Jadeja since his debut. The 28-year-old has taken 72 wickets in 41 ODI matches at an economy of 4.89.

Taking the recent form into consideration, Chahal will have an upper hand over Kuldeep Yadav. Chahal managed to grab 18 wickets in 14 games while playing for Royal Challengers Bangalore in IPL 2019. Chahal's best spell was against Mumbai Indians, where he disrupted Mumbai Indians' by scalping four wickets while conceding 38 runs.

However, Kuldeep Yadav's IPL season was a nightmare for him. The 24-year-old managed to take only four wickets from nine games while playing for Kolkata Knight Riders. Rubbing salt to the wound, he was dropped from KKR's starting line-up for their last five league matches.

But the scenario has been completely different for Kuldeep Yadav while donning the blue jersey. The chinaman bowler has taken 87 wickets for the nation in 44 matches at an impressive economy of 4.93.

Among current lot of Indian bowlers going for World Cup 2019, Yadav has played the maximum ODIs--30 in 2018. When Yadav was asked regarding his poor form in IPL 2019, he stated that "It is a different format, a 50-over game is a lot different to a T20. The conditions are a lot different too. "

"The wickets there will be a lot faster, the ball will spin too when the temperature will be high and we will get dry pitches. Spinners will get a huge advantage and that remains my focus." Yadav would be certainly looking forward to redeem himself in the mega-event.

The inclusion of Vijay Shankar has increased the seam bowling options for team India. But on the other hand, it has also emerged as a threat to the young duo. If India opts to rely on fast bowling options in the tournament, there are possibilities that either of the spinners would get axed from the starting line-up.

In that case, both the spinners would have fierce competition to book their place in the starting eleven. Furthermore, left arm orthodox all-rounder-- Ravindra Jadeja will also be in contention for a spot in the starting line-up to add bowling depth to the team.

Also, Kedar Jadhav was declared fit on May 18 and has travelled with the team for the World Cup. Jadhav will also be a handy spin bowling option due to his unconventional round-arm action.

India will open their World Cup 2019 campaign against South Africa on June 5 at Hampshire Bowl, Southampton. The tournament will be played according to the round robin format, where each time will play nine matches.