Sports   Cricket  24 May 2019  Bangladesh looks to unveil their full potential as they aim to change world views
Sports, Cricket

Mortaza urged his players to therefore make sure the cricketing world takes notice from the moment they start their campaign against SA. 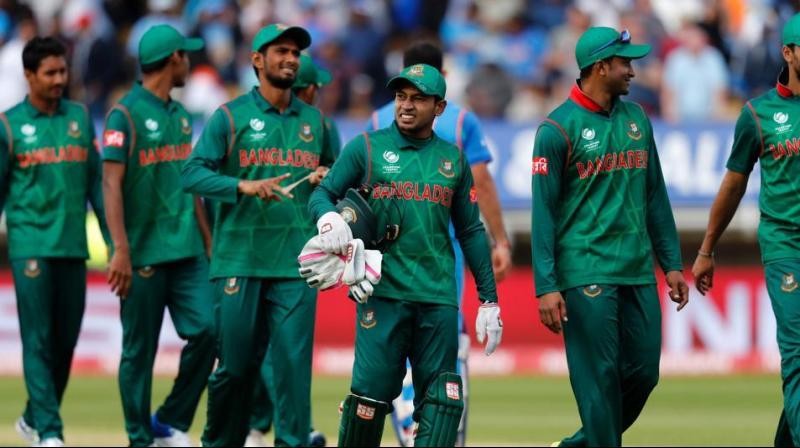 Bangladesh registered their best finish at the 50-over World Cup at the 2015 tournament in Australia and New Zealand when they reached the quarter-finals, having defeated England in the group stages.(Photo: AFP)

Mumbai: Bangladesh head to the cricket World Cup to change perceptions about their potential to compete despite having consistently punched above their weight in recent 50-over tournaments.

The Tigers registered their best finish at the 50-over World Cup at the 2015 tournament in Australia and New Zealand when they reached the quarter-finals, having defeated England in the group stages.

They then proved their World Cup progress was no fluke by qualifying for the semi-finals of the 2017 Champions Trophy from a group that featured hosts England, Australia and New Zealand.

But just days before the start of the World Cup on May 30, the side does not feature in picks among teams that are expected to make the last four at the one-day international showpiece.

Bangladesh captain Mashrafe Mortaza urged his players to therefore make sure the cricketing world takes notice from the moment they start their campaign against South Africa at The Oval on June 2.

“If you ask all the experts, analysts and former players about their favourites for this World Cup, none of them will pick us,” Mortaza told reporters.

“I think we can change some perceptions if we can do something this time, more than how much it changed in the past. It is a great opportunity for us.”

There will be no dearth of experience in the side with Mortaza, all-rounder Shakib Al Hasan, batting mainstay Tamim Iqbal and wicketkeeper-batsman Mushfiqur Rahim all making their fourth World Cup appearances.

All four also have knowledge on how to win games on the big stage, having played in the 2015 victory against England in Adelaide and also when they defeated heavyweights India at the 2007 tournament in the West Indies.

The skilful Mustafizur Rahman will lead the pace attack and is expected to be a handful with his many variations.

“We must work really hard, and it is important to find out if we are prepared to do that,” said Mortaza, who will be playing his final ODI World Cup.

“The best teams sometimes don’t make it to the semi-finals, let alone win the World Cup.

“There’s no pressure on us to win the World Cup, or even reach the semi-finals. We just want to play well.”

While the experts have not placed much hope on the South Asian side, former captain Mushfiqur believes a last-four spot could be within reach for Bangladesh, with teams needing to be consistent in the 10-team round-robin format.

“Having most experienced players in the team, this is the strongest World Cup team that Bangladesh have ever had,” he said. “It’s not impossible. It’s tough, but possible.

“I personally believe that we have the ability to reach the knockout stages, and anything can happen if we can reach that point.”