Sports   Cricket  24 May 2017  Pandya Brothers: Keeping the checks and balances in place for Mumbai Indians
Newsmakers

Pandya Brothers: Keeping the checks and balances in place for Mumbai Indians

While Hardik Pandya has been a regular on the international scene, his brother Krunal had his breakthrough with Mumbai Indians in IPL 2017. 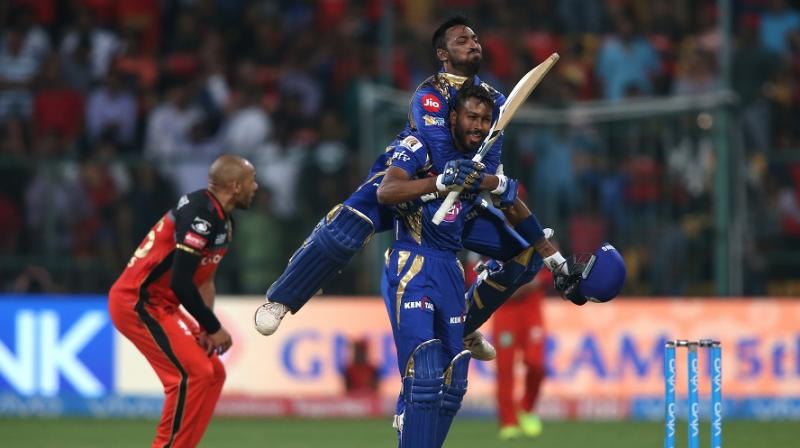 The 2017 Indian Premier League season saw the rise of yet another sibling duo – Krunal and Hardik Pandya. (Photo: BCCI)

Mumbai: Siblings in cricket are not an unknown phenomenon. From the Chappells to the Waughs, and down to the Pathans, brothers have always mesmerised cricket fans all over the world.

The 2017 Indian Premier League season saw the rise of yet another sibling duo – Krunal and Hardik Pandya.

While Hardik has been on the international circuit for quite some time now, the recently concluded IPL season turned out to be the breakthrough campaign for Krunal, who had joined Mumbai Indians back in 2015.

The former has already represented Team in seven ODIs and 19 T20Is, and has also captained the A side in a First Class warm-up game against , ahead of the four-Test Border-Gavaskar Trophy, earlier this year.

Meanwhile, Krunal is yet to get a proper break in the longer formats of the game, having played only one First Class match for against , last year.

With the rise in popularity of the Pandya brothers, comes the question, what made them such a hit for the Mumbai Indians?

What makes their rise, especially in T20 cricket, so special is that both of them can do a bit of everything – literally. The combination of Krunal and Hardik gives Mumbai a great many options, as they are equally good with both the bat and the ball.

Hardik gives Mumbai that pinch-hitting option in the middle of their batting order, something that comes in handy in limited-overs cricket, especially T20s. To add to that, he can also be used as one of the prime bowlers for in any lineup.

Hardik’s consistency with the line and length, and his ability to read the game well, coupled with his batting abilities, which have been improving by leaps and bounds ever since he brome into the international scene, makes him a great asset for the Rohit Sharma-led side.

The inclusion of just one all-rounder could impart a lot of balance to a side. However, the presence of two makes Mumbai Indians look very strong – especially when both are firing on all cylinders. This is where Krunal comes in.

Initially thought of as the second all-rounder in the side, Krunal grew in stature as the tournament progressed, and has quickly become a household name, just like his brother did a year back. In some respects he has even eclipsed his Hardik with his performances this season, having taken more wickets (10) than Hardik (6), while also maintaining a very good economy rate of 6.82.

Krunal has also played a crucial role with the bat, scoring match-winning knocks of 37 (not out) and 45 (not out) against Royal Challengers Bangalore in the league stage and Kolkata Knight Riders in the second qualifier, respectively.

However, Krunal arguably played his best innings in T20 cricket against Rising Pune Supergiant, in the 2017 IPL final, where a slowish pitch played a big part.

The 26-year-old came in to bat when Mumbai were struggling at 41 for three from 7.2 overs, and anchored the innings till the end, to make sure his side posted at least a defendable total of 129 for eight.

He may have fallen three runs short of a half century, but his gritty 47 from 38 balls was one of the most important knocks he has played in his fledgling career so far. Not only did he score the important runs when required, but he also put a price on his wicket, and stayed at the crease till the last ball, which is exactly what Mumbai needed him to do.

It is not without reason that former great and current Sunrisers Hyderabad mentor VVS Laxman believes that Krunal is an all-rounder with a lot of potential, despite the fact that he burst into the scene a year later than his younger brother.

The Pandya brothers have proved to be excellent individual all-rounders, who can impart balance to any side. However, when taken together, they can form a deadly duo that contains the entire package – anchoring the innings, pinch-hitting, and pace and spin bowling.