Sports   Cricket  24 Apr 2019  'The back is holding up and it's not getting worse': Dhoni hopes to recover before WC
Sports, Cricket

'The back is holding up and it's not getting worse': Dhoni hopes to recover before WC

Dhoni had many reasons to smile as CSK defeated Sunrisers Hyderabad on Tuesday by six wickets at Chennai in the ongoing edition of IPL. 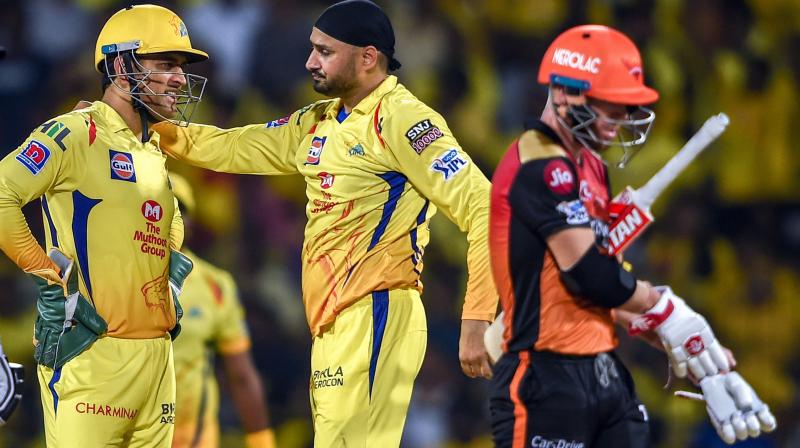 With this win, Chennai Super Kings once again reached the pole position in the IPL league standings with 16 points. (Photo: PTI)

Chennai: Chennai Super Kings (CSK) skipper MS Dhoni on Tuesday said that his back is holding up well and it's not getting worse and he cannot take any chances as the World Cup is coming up.

"The back is holding up, it's not getting worse, with the World Cup coming up, can't afford that, because that's too important," Dhoni said at the post-match ceremony.

Dhoni had many reasons to smile as CSK defeated Sunrisers Hyderabad on Tuesday by six wickets at Chennai in the ongoing edition of Indian Premier League (IPL).

Shane Watson, the former Australian all-rounder starred for the hosts as he smashed a 96-run knock off just 53 deliveries to enable the team to chase down the target of 176 runs.

The CSK captain also shared his views on the match-winner Watson and said that batsman was batting well in the nets, so it was just a matter of time he got it together in the matches as well.

"I think you can give individuals a few games. Watson has been a match winner for us so we need to back him and he has been batting well in the nets. If Watson gets going, you know what's on the plate.

It started last year and it's good to see different individuals come good, the bowlers have done surprisingly well, the batting needs to click together," Dhoni said.

Watson after playing a 96 run knock said he has to thank both skipper and coach of CSK to keep their faith in him.

"I was due runs, that's for sure. I can't thank Stephen Fleming and MS Dhoni enough to have kept faith in me. In any other team, I may have been dropped sooner. Happy to repay that faith."

"I knew I was in good nick, just needed to get my head right, get my technique right, had a bit of luck by playing and missing in the beginning," Watson said at the post-match ceremony.

With this win, Chennai Super Kings once again reached the pole position in the IPL league standings with 16 points.

The team next takes on Mumbai Indians on Friday, 26 April at Chennai.