The Chennai pitch which has been under the scanner for its slow nature looked a lot better than the ones used for the previous games. 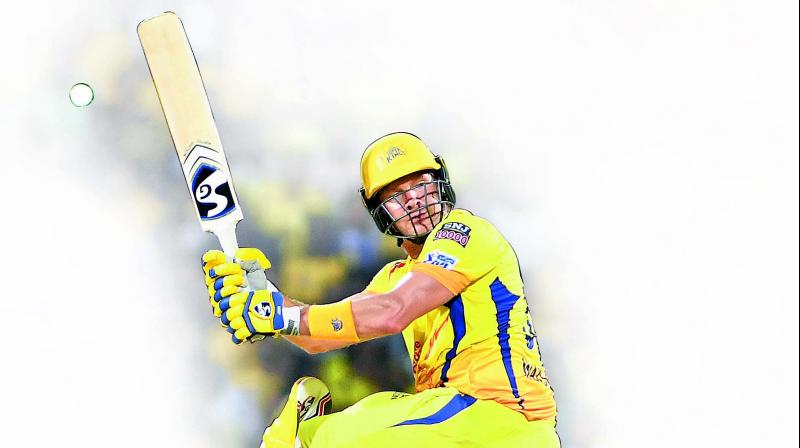 Shane Watson hits a shot in the game against SRH. (Photo: EK Sanjay)

Chennai: Despite their inconsistent form Chennai Super Kings continued to back their top-order and it was time for the under-fire batsmen to dutifully repose the faith on Tuesday. After a string of failures, Shane Watson roared back to form with a brilliant 96 off 53 as Super Kings regained their No.1 spot in the table. The entertaining six-wicket win over Sunrisers Hyderabad boosted their tally to 16 points in 11 games.

In the familiar conditions of Chepauk, where CSK haven’t lost a match in IPL-12, Watson produced a blistering knock for his first fifty of the season and Suresh Raina chipped in with a cameo (38 off 24 balls) as CSK overhauled Sunrisers’ 175 with a ball to spare.

It was Raina who set the tone for the chase with a blitz in the last over of the Powerplay. The left-handed batsman hit Sandeep Sharma for 22 runs. As Raina departed — stumped off Rashid Khan — Watson took it upon himself and stepped on the accelerator.

The battle between the powerful Watson and wily spinner Rashid spiced up the contest with the veteran Aussie emerging on top. Against Rashid, Watson scored 30 runs in 13 deliveries.

Earlier, Sunrisers who were cruising towards a big total had to settle for 175/3 as Super Kings roared back through Dwayne Bravo and Deepak Chahar in the death overs. With Bravo and Chahar bowling in tandem, Hyderabad could only manage 24 runs in the last three overs.

The Chennai pitch which has been under the scanner for its slow nature looked a lot better than the ones used for the previous games.

CSK still found early success when Harbhajan Singh, in the second over, successfully shivered the best opening pair of this edition. Jonny Bairstow (0) edged a straighter one to Dhoni as his fruitful IPL sojourn came to an end on a disappointing note. The wicket-keeper batsman who scored 445 runs in 10 innings returns to London for England’s World Cup preparation camp.

The early departure of Bairstow left David Warner in an unusual situation. But he found an able ally in Manish Pandey. Coming in at 5 for one, Manish was under tremendous pressure. Having spent three matches on the sidelines due to his poor run of form, Manish also had a battle within. He, however, started confidently with a lofted shot over off Harbhajan for four.

Harbhajan who bowled well in his first over was clobbered the off-spinner over long-off for a big six.

The Karnataka batsman not only kept pace with the in-form opener Warner, but also pipped the Aussie to the half-century by raising the mark in just 25 balls. At the half-way mark, Hyderabad had the upper hand, scoring 91 for 1.

A punch down the wicket off Chahar highlighted Warner’s power, while Manish took a special liking for leg-spinner Imran Tahir. The duo also ran well between the wickets, collecting 12 twos between them. Warner scored his 43rd IPL half-century and seventh of the season as the second-wicket stand fetched Sunrisers 115 runs in 72 balls.

Harbhajan returned to remove Warner, brilliantly stumped by Dhoni, and Sunrisers’ run-rate took a nosedive from then on.