'It was a difficult pitch to bat, but it wasn't unplayable': Harbhajan

The 38-year-old admitted that he and his team were surprised at the amount of turn they got from the pitch. 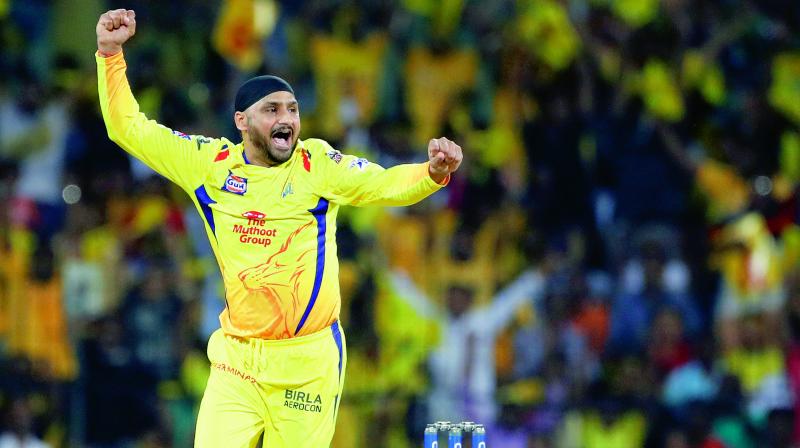 Harbhajan, who did not have a great season in the 2018 edition of the IPL, said it was nice to be on the winning side and contributing to the team's cause. (Photo: AP)

Chennai: The slowness of the Chepauk track might be attracting a lot of criticism but veteran off-spinner Harbhajan Singh said while the wicket was difficult to bat, it was not unplayable.

Rival captains Mahendra Singh Dhoni and Virat Kohli expressed their disappointment over the wicket here after the opening match of the Indian Premier League turned out to be damp squib last night.

After Royal Challengers Bangalore got bundled out for 70 in 17.1 overs. Chennai Super Kings achieved the target in 17.4 overs, winning by seven wickets.

"See, it was a difficult pitch to bat on but it wasn't like it was unplayable. We're so used to watching matches on good wickets where no one complains when people score 170-180. But if it spins or seams a little, everyone has a problem, saying why is this happening?," Harbhajan said at the post match press conference.

"No one has a problem with why so many runs are being made. So people actually forget that the bowler also has a job in cricket. Batsmen should struggle once in a while so that they understand that it should be a battle of bat and ball.

"In some places, yes, they played some rash shots as well. It was not that this was a 70 runs wicket. You'll get at least 120 if you apply yourself," Harbhajan, who won the man-of-the-match award for his spell of three for 20, said.

The 38-year-old admitted that he and his team were surprised at the amount of turn they got from the pitch.

"It was a wicket where it was holding a bit. We honestly didn't expect it to turn so much as it did today. We played a practice match here and the wicket was a good one. We would have preferred to play on a wicket that wouldn't spin as much as this did. Hopefully it would be better hereafter."

Harbhajan, who did not have a great season in the 2018 edition of the IPL, said it was nice to be on the winning side and contributing to the team's cause.

"It is nice to be on the winning side and contributing, especially taking the wickets of Virat (Kohli), AB (de Villiers) and Moeen (Ali)...top-order batters. This is the kind of performance that is expected from me, being the senior bowler in the side.

"Though people might think that I am old but the experience is something I have gained over the years, which no one can take away from me. I am glad to contribute to the win," said the CSK tweaker.

Harbhajan praised his teammate Ravindra Jadeja, who took two wickets in the game, to be a key member of the Indian team in the upcoming World Cup in England.

"I feel someone like Ravindra Jadeja is always in the game as long as he is looking to spin the ball. He is someone, though I don't want to talk way too much about the World Cup, I feel he could be a key member for the Indian team to win that. He bowls, bats and is a brilliant fielder, a gun fielder. Finger spinners should be given the responsibility and they will deliver," said Harbhajan.

"I don't think we played well enough and CSK were by far the better side. We were surprised by spin and lack of pace and it spun far more than we thought. It was probably not an ideal pitch as it was not an even contest. You need an opportunity to score as well," he said.

Solanki, however, felt that his team could have done better if it had managed to get one good partnership.

"Perhaps 120-130 would have been enough, but batting first in the first game in the tournament we needed to be brave and say maybe should have looked to get to 100 and look at things. We needed just one partnership and if necessary could have even played ugly and dug in to stop the rut of constant wickets."

Insisting that there were some positives which could be taken from the game, Solanki said, "It is not ideal. There are some positives though. (Yuzvendra) Chahal bowled a wonderful spell. Moeen (Ali) also bowled well and (youngster Navdeep) Saini bowled with pace. Far from an ideal performance but we have to move on."