Royal Challengers Bangalore were all out for 70 in 17.1 overs, a target that Chennai Super Kings achieved in 17.4 overs. 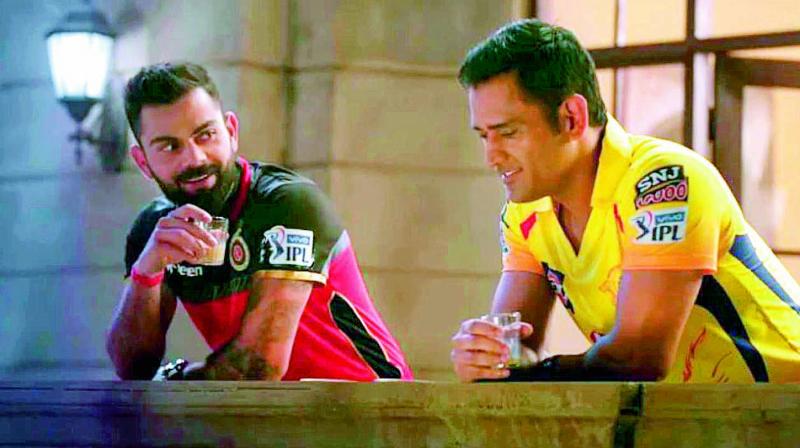 Despite finishing on the winning side, Dhoni made it clear that he would expect better wickets in the upcoming games. (Photo: File)

Chennai: The IPL 2019 opener turned out to be a low-scoring contest and rival captains Mahendra Singh Dhoni and Virat Kohli expressed their dissatisfaction over the slowness of the Chepauk track.

Royal Challengers Bangalore were all out for 70 in 17.1 overs, a target that Chennai Super Kings achieved in 17.4 overs to win the match by seven wickets.

Despite finishing on the winning side, Dhoni made it clear that he would expect better wickets in the upcoming games.

"I never expected the wicket to play how it actually played. It was too slow. We were really surprised by how slow the wicket was. It reminded me of a Champions League wicket in 2011 after we won the IPL.

"The wicket definitely needs to be much better, even with dew it was spinning big," Dhoni said at the post-match presentation ceremony here last night.

Kohli, who is also the Indian captain, on his part said: "The wicket looked much better than it played. No one thought the wicket's going to play the way it played. We thought somewhere 140-150 would be an ideal score because of the dew factor later on. A scrappy sort of start to the league. That is what you get when you have a wicket like that.

"But either team would have struggled batting first. I don't think either team had control over it. The pitch was under the covers for four days."

Kohli felt neither teams enjoyed "that kind of a pitch".

"I don't think either of the team would have enjoyed that kind of a pitch, especially in T20 cricket where guys want to get runs and put the runs on the board or chase scores down."

Dhoni said any genuine spinner will do well on this track.

"Something like 140-150 is something you are looking at; 80, 90, 100 or 120 is very low scoring. If you saw how the wicket played and if you have genuine spinners in your line-up you can create lot of trouble. It will be very difficult to score runs.

"So the wicket needs to get much better than where it is right now. It needs to be (more) high scoring. Other teams have good spinners as well and this isn't the pitch we are looking forward to," the CSK skipper added.

Dhoni said his reason for opting to bowl after winning the toss was the uncertainty over how the surface would behave as CSK had the experience of playing a practice match leading into the IPL opener.

"We were not really sure about the wicket. We played a practice game on the same wicket and it wasn't turning so much. It was a slightly high-scoring game. Yes, practice game, there is a tendency normally you will score 30 runs more than what you will in a proper game."

For Kohli, it was a relief that a match like this happened at the start of the tournament.

"We spoke of trying to be in the game, taking it to the 18th over was nice to see."

Kohli, however, admitted that his team's batting was not good.

"The batting wasn't good, it wasn't easy to bat on, looked much better surface though. We should have batted better. If that was 100-110 run game it would have been very close," he said.