Indian batting crumbled in both innings to excellent seam bowling 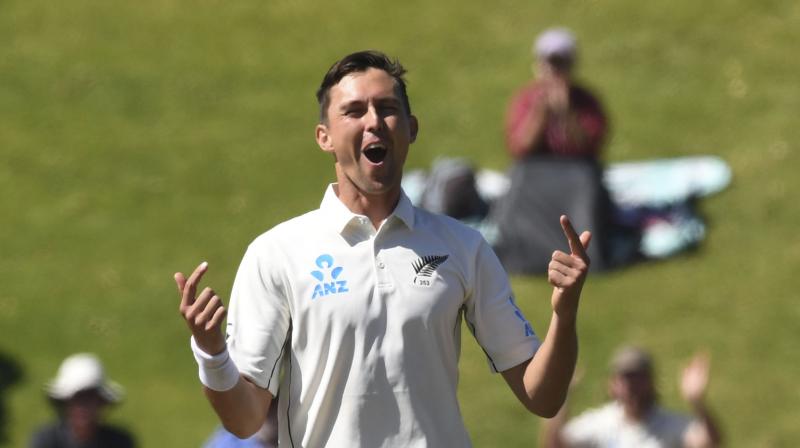 New Zealand's Trent Boult celebrates the dismissal of India's Ajinkya Rahane for 29 runs during the first cricket Test between India and New Zealand at the Basin Reserve in Wellington, New Zealand, February 24, 2020. (AP)

Wellington: Indian batsmen's inadequacies in adverse conditions were laid bare as they crashed to an embarrassing 10-wicket defeat against a ruthless New Zealand side that wrapped up the opening Test in just over three days here on Monday.

Starting the day on 144 for four, India were all out for 191 in their second innings. This was only a shade better than their dismal 165 in the first innings, which eventually proved to be decisive.

Trent Boult (4/39 in 22 overs) and Tim Southee (5/61 in 21 overs), the most under-rated new ball pairs in world cricket, showed that when it boils down to playing incisive seam and swing bowling, this batting line-up is still a work in progress.

The required target of nine runs was knocked off by New Zealand without much ado for their 100th Test win.

India's last defeat was against Australia at Perth during the 2018-19 series but the loss at the Basin Reserve would hurt them more because the visitors have not surrendered in such a fashion of late.

There was no resistance from a star-studded line-up and more than intent, the failure was due to poor technique on a track that had something on the third and fourth day as well.

This is a team that plays fast bowling much better than their predecessors, the reason for their success on the bouncy Australian tracks.

But when it comes to facing conventional seam and swing bowling in testing conditions, they are yet to learn the art of saving a Test match.

India had lost the mental battle on the first day itself when they saw the moisture on the wicket.

The toss became a factor and not for one session did they look comfortable. Mayank Agarwal was the only batsman, who felt at home in patches, as New Zealand showed what a Test match strategy is all about.

If the first innings was about mixing back of length deliveries with fuller length balls, the second innings saw the pacers coming from round the wicket and targeting the rib-cage. The line was disconcerting and it stifled them for good.

It affected their mindset and once Ajinkya Rahane and Hanuma Vihari stepped out on the fourth morning, defeat was written all over as both looked ill-equipped to handle such high quality seam bowling.

Rahane (29 off 75 balls) and Vihari (15 off 79 balls) are players who only play long-form cricket at the international level and both are known for their patience.

But little would have the Indian vice-captain apprehended that he would get a delivery from Boult, which he thought would move away after pitching but it held its line and he had no option but to jab at it, and all he got was an edge.

Southee, who bowls a lovely classical outswinger, then bowled an off-cutter from the other end and before Vihari could comprehend, it came back sharply to peg the stumps back.

Within first 20 minutes, the two seasoned practitioners of swing had knocked the stuffing out of India's resistance.

Rishabh Pant (25 off 41 balls) batted only in the manner he can and played one breathtaking shot off Southee, a slog sweep off a 130 kmph-plus delivery to the deep mid-wicket boundary.

But there was too much left to do with too little support from the other end. Bending on one knee, he tried another audacious slog scoop but couldn't clear.

Southee, who had a terrific match, deservingly completed his 10th five-wicket haul and all it took was 16 overs to end the innings and the match.

New Zealand now have 120 points in the World Test championship and India stayed on top with 36 points.