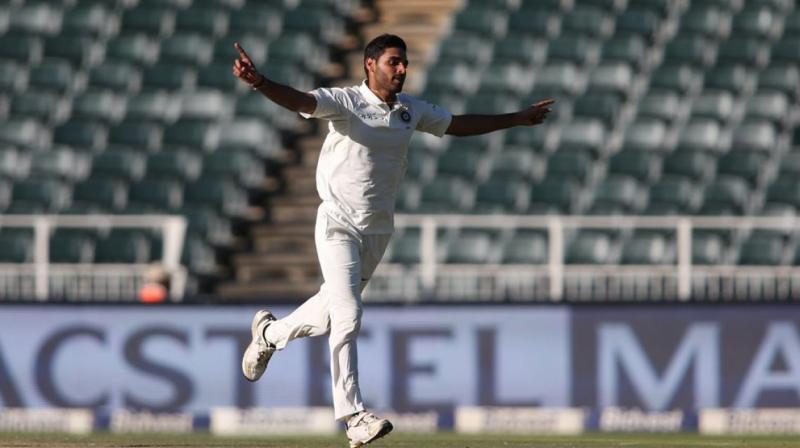 Johannesburg: Bhuvneshwar Kumar’s lone wicket during South Africa’s first innings helped the visitors restrict the hosts to six for the loss of one wicket at stumps on Day one of the third Test here on Wednesday. The hosts currently trail by 181 runs.

The pacer, who was dropped from the last match, removed Aiden Markram early in a shortened final session.

Earlier, the visitors were bowled out for 187 in their first innings.

Only six overs were bowled after the conclusion of India’s innings, and the visitors looked in control of the match for a while.

Following Markram’s departure, Kagiso Rabada was the nightwatchman in at number three.

India will be hungry for more wickets when the two teams come out to play on Thursday, and will look to take this positive momentum forward.

WICKET! Bhuvneshwar Kumar strikes early, as he seees off Aiden markram for two runs. This is just the start India would have wanted.

India were bowled out for 187 in their first innings on Day one of the third Test against South Africa here on Wednesday.

After having won the toss, the visitors decided to bat. However, nothing worked out according to plan as they lost openers KL Rahul and Murali Vijay in the first eight overs.

However, soon after, it was captain Virat Kohli who took India back to safety with a knock of 54. Cheteshwar Pujara, too, showed some brilliant fightback, but collapsed soon after scoring his fifty.

In terms of South Africa’s bowling, every bowler scalped at least a wicket.

While Lungi Ngidi continued his good form by removing Kohli, Vernon Philander, Morne Morkel and Andile Phehlukwayo picked up two wickets each. Kagiso Rabada, the number one bowler in Tests, picked up three wickets in the innings.

WICKET! Hardik Pandya returns to the pavilion, as India continue to lose wickets.

WICKET! Nothing is going right for the visitors at the moment, as Parthiv Patel has become the latest to depart. Quinton de Kock makes no mistake again, as he takes a good catcht to complete the dismissal.

FIFTY! Cheteshwar Pujara has got to his 17th Test fifty, as India march on.

South Africa cruised control on Day 1 of the third Test against India by getting rid of Virat Kohli and Ajinkya Rahane before heading into tea break. The visitors who elected to bat after winning the toss, are currently placed at 113-4.

Having already taken an unassailable 2-0 lead in the Freedom Test series, the South African bowlers made life tough for the opposition batsmen at the start of the innings. Both openers, Murali Vijay and KL Rahul were back to the pavilion as early as the 9th over.

However, India skipper Virat Kohli took of the early pressure with a steady partnership at the crease alongside Cheteshwar Pujara.

The Proteas soon bounced back as Lungi Ngidi dismissed Kohli. Rahane who was given a lifeline after being caught out to Vernon Philander on a no-ball, fell victim to Morne Morkel through LBW.

With a final session to go, Kohli and co will aim to lose no more wickets before the end of Day’s play.

WICKET! Ajinkya Rahane has been struck LBW by Morne Morkel, as he departs for nine runs. India took the revie, but it ended in umpire's call, with the original decision being out.

WICKET! Virat Kohli walks back to the pavillion after completing his half century. Big blow for India Ngidi gets Kohli yet again. Kohli went hard at the ball outside off only to edge it to de Villers at slip.

South African bowlers have been spot on with their line and length. Openers KL Rahul and Murali Vijay once again failed to provide good start. Both the batsmen were all over the place as they came close to edging the ball behind the stumps number of times.

South Africa finally got the breakthrough as Philander got rid of KL Rahul caught by wicket-keeper de Kock behind the stumps. A very disappointing series for the Karnataka batsman. Vijay also failed to get going, edging the ball straight to wicket-keeper off Rabada’s bowling.

WICKET! Murali Vijay departs, Rabada strikes for South Africa. India lose their second wicket. Fuller length outside off stump, Vijay goes for drive without much movement of his feet . The ball takes edge and goes straight into hands of wicket-keeper

Close call for Cheteshwar Pujara, the inswinging ball hit  him on the front pad and Philander appealed for LBW. Faf du Plessis goes for review. The ball will be clipping the top of the leg stump. The decision stays , but South Africa lose their review

WICKET! KL Rahul departs, India lose their first wicket. Philander strikes in hi second over. The ball came back sharply and found inside edge of Rahul's bat and goes straight into the hands of wicket-keeper Quinton De Kock

A special mention for @VDP_24, who today reaches his half century of Test appearances for the @StandardBankZA Proteas. What a player he has been #ProteaFire #SAvIND #SunfoilTest pic.twitter.com/qCpZHX5A97

Virat Kohli has won the toss and elected to bat again. There are two changes in the Indian team. Ajinkya Rahane replaces Rohit Sharma. Bhuvneshwar Kumar comes in for R Ashwin as India go  out with all pace attack.

Good morning and welcome to Johannesburg for the final #SunfoilTest of this #FreedomSeries. Will it be a clean sweep by SA or will India salvage some pride? #ProteaFire #SAvIND pic.twitter.com/5Hwajol5pN

Johannesburg: The Test series may have been decided with South Africa comprehensively beating India at Cape Town and Centurion, but the third and the final Test match, which will take place at Wanderers on Wednesday, will be important for both the teams as the no 1 spot is up for grabs.

Team India will look to field all pace attack on Wanderers pitch that will provide help to pace bowlers. With Rohit Sharma failing to score runs with the bat, Ajinkya Rahane might get look in in today's match. Bhuvneshwar Kumar who was left out in the last game is also expected to comeback in the side.

Meanwhile South Africa will look to make a clean sweep after all round performance in the first two test matches.  Looking at the nature of the pitch South Africa will also look to include one more pacer in the side to make things more difficult for India batsmen.Vernon Philander who is playing his 50th Test will look to do maximum in the early stages of the match as Indian batsmen have failed to deal with pace and bounce generated by the bowlers.

What time does the match start?

The match is scheduled to start at 1.30 pm IST

Where can you watch the match?