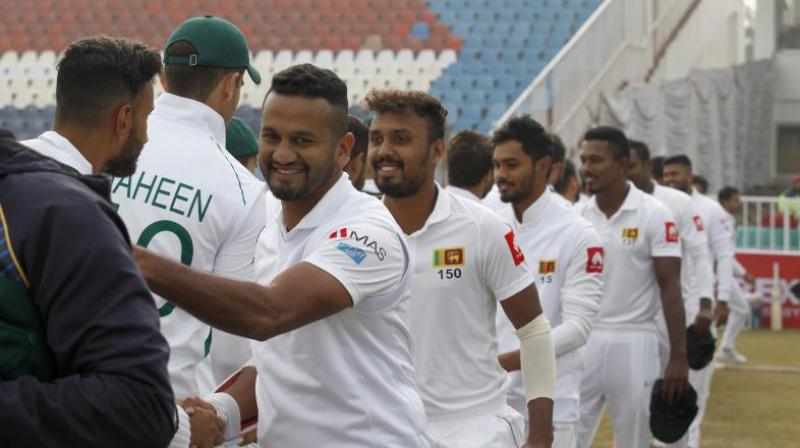 Karachi: Pakistan thanked Sri Lankan Monday for helping them bring Test cricket back to the country for the first time since the 2009 attack on the same visitors led to international matches being suspended.

Pakistan's players went to the Sri Lanka dressing room to thank them soon after the home team posted a convincing 263-run win in the second Test of their first home series in a decade.

The victory gave Pakistan a 1-0 series win following the rain-ravaged draw in the first Test in Rawalpindi.

"They have given us immense happiness by playing in Pakistan," said Azhar after his team wrapped up victory in just 14 minutes of play on the fifth day.

Sri Lanka - set 476 to win - were bowled out for 212, with teenaged Pakistan paceman Naseem Shah taking five for 31.

At 16 years and 307 days old, Naseem became the second youngest bowler overall and youngest quickie to claim five wickets in a Test inning.

Left-arm Pakistani spinner Nasim-ul-Ghani was four days younger when he took five wickets against the West Indies at Georgetown in 1958.

Fast bowler Mohammad Amir - also from Pakistan - was aged 17 years and 257 days when he took five against Australia at Melbourne in 2009. Azhar said the occasion and win brought happiness to all his players, who had never taken part in a Test match at home.

"It's a great occasion for happiness for all of us that we won the series. It carried great importance and was very significant because we were playing our first home Test," said Azhar.

Since then they have been forced to play their home matches at neutral venues in the United Arab Emirates.

Pakistan hosted Sri Lanka for three one-day internationals and Twenty20 matches in September-October that paved way for this Test series.

"Security was 200 per cent," said Karunaratne, one of ten players who withdrew from the limited over tour over security fears.

"Security people were like fathers to us. They kept talking to us and they were right behind us every time. When we were going out to eat or shopping, they were there."

Karunaratne urged other teams to consider touring Pakistan, but admitted they would need convincing.

"They have seen us playing here and enjoying here. They will have something in their minds and they will decide (for themselves)," he said.