This is the first victory by Pakistan on Pakistani soil in 10 years. 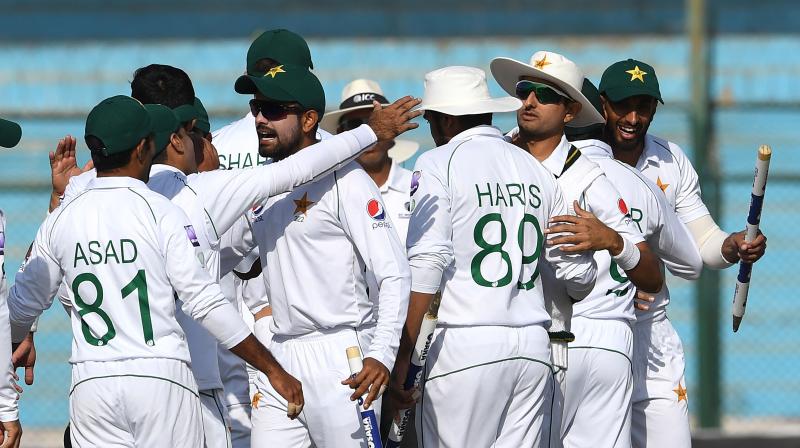 Pakistan registered a massive 263-run victory against Sri Lanka on the fifth day of the second Test here on Monday. (Photo: AFP)

Karachi: Pakistan registered a massive 263-run victory against Sri Lanka on the fifth day of the second Test here on Monday.

This is the first victory by Pakistan on Pakistani soil in 10 years.

Sri Lanka resumed their second innings from 212/7 on Day 5 with Lasith Embuldeniya and Oshada Fernando at the crease.

Pakistan's Naseem Shah took a five-wicket haul to his name. He dismissed Embuldeniya (0) on the first ball of the day. Vishwa Fernando then came out to bat.

The duo failed to form a good partnership as Oshada Fernando too was sent back to the pavilion by Yasir Shah in the very next over.

Oshande Fernando was the highest run-getter from Sri Lanka's side in the second innings as he scored 102 runs.

Lahiru Kumara was the next batsman to come to the crease but his partner Vishwa Fernando was adjudged leg before wicket off Yasir Shah's delivery in the next over. Hence, Sri Lanka were all out on 212 runs without adding a single run to its overnight total.

Pakistan were bundled out on 191 runs in their first innings but made a stunning comeback as they declared their second innings on 555/3.

On the other hand, Sri Lanka had racked up 271 runs in their first innings.
With this victory, Pakistan claimed the third spot in the ICC World Test Championship table with 80 points, only behind Australia (216) and India (360).