With this win, India won the series 2-1. This is Men in Blue's tenth consecutive series win over Windies. 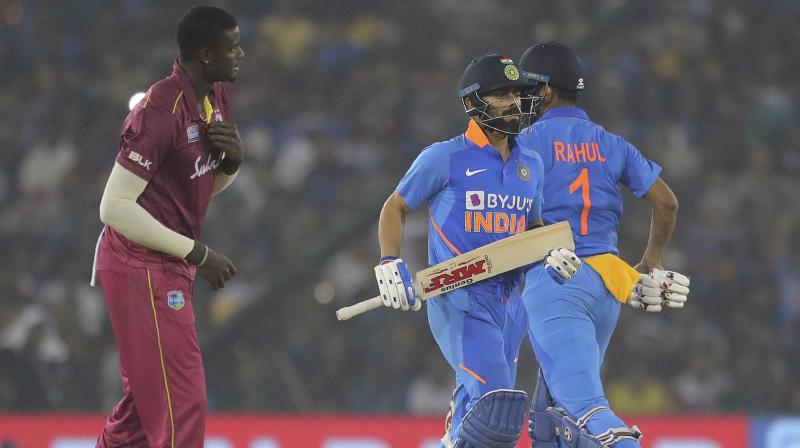 Virat Kohli starred with the bat as India defeated West Indies by four wickets in the third and final ODI of the three-match series here at Barabati Stadium on Sunday. (Photo:AP)

Cuttack: Virat Kohli starred with the bat as India defeated West Indies by four wickets in the third and final ODI of the three-match series here at Barabati Stadium on Sunday.

With this win, India won the series 2-1. This is Men in Blue's tenth consecutive series win over Windies.

Chasing 316, India got off to a steady start as openers KL Rahul and Rohit Sharma put on 122 runs for the first wicket. Their partnership saw both batsmen bring up their respective half-centuries.

Windies finally got the breakthrough in the 22nd over as Rohit (63) was sent back to the pavilion by Jason Holder. Skipper Virat Kohli next came out to bat and along with Rahul, put on 45 runs for the second wicket.

Kohli brought up his half-century in the 37th over of the Indian innings. But, India was given a big setback as Kedar Jadhav (9) was clean bowled by Sheldon Cottrell in the 39th over, and hopes of winning the match rested completely on Kohli's shoulders.

Ravindra Jadeja next came out to bat and provided much-need support to Kohli at the other end. The duo put up a partnership of 58 runs to give much-needed stability to the side. However, with 30 runs required from the final four overs, Windies got the biggest breakthrough possible as Keemo Paul clean bowled Kohli (85) in the 47th over.

In the end, Shardul Thakur and Jadeja ensured India's victory by four wickets and eight balls to spare. Jadeja and Thakur remained unbeaten on 39 and 17 respectively.

Earlier, Nicholas Pooran and Kieron Pollard's knocks of 89 and 74* respectively enabled West Indies to post 315/5 in the allotted fifty overs.

After being asked to bat first, Windies openers Evin Lewis and Shai Hope put on 57 runs for the first wicket. Ravindra Jadeja got the first breakthrough for India as he dismissed Lewis (21) in the 15th over of the innings. Soon after Hope (42) was sent back to the pavilion, reducing Windies to 70/2.

Shimron Hetmyer (37) and Roston Chase (38) then put on 62 runs for the third wicket, but their stint at the crease was ended by Navdeep Saini and Windies found itself at 144/4 in the 32nd over.

Kieron Pollard and Nicholas Pooran, then got together at the crease and the duo put on 135-runs for the fifth wicket. The duo kept on hammering Indian bowlers all around the park in the final overs.

Pooran was dismissed for 89 while Pollard remained unbeaten on 74. For India, Saini took two wickets.