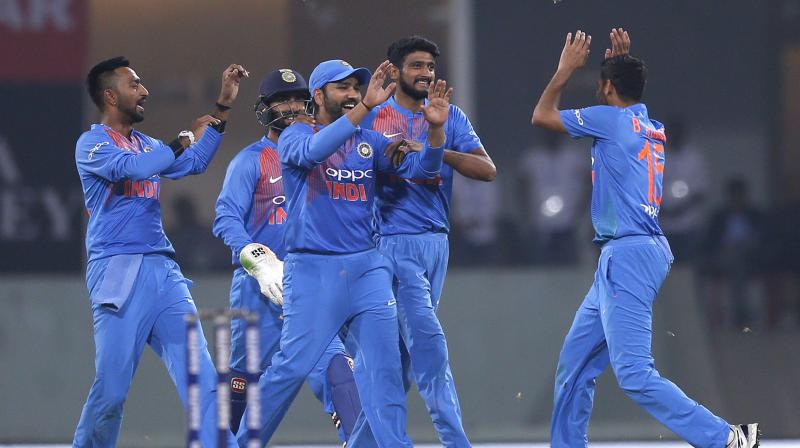 Melbourne: The second T20I between Australia and India at the Melbourne Cricket Ground (MCG) on Friday was abandoned due to heavy rain.

Sadly, the play has been called off at the MCG. Australia take a 1-0 series lead with one more game to go.#AUSvIND pic.twitter.com/C3b9iKxNM2

As a result, Australia lead the series 1-0 following their win in Brisbane and the best India can do is to level the series 1-1 with the final match in Sydney on Sunday.

The visitors had won the toss and elected to field.

They got off to a dream start with Bhuvneshwar Kumar dismissing Aaron Finch for a golden duck in the very first over.

Even Maxwell (19), who played a match-winning knock of 46 on Wednesday, could not perform upto expectations as Krunal Pandya joined the party.

However, rain made its first appearance just before the final over of the Aussie innings with Ben McDermott (32) and Andrew Tye (12) remaining unbeaten.

This was the start of a long wait as the rain never seemed to stop, and the match was eventually called off.

CAUGHT! Kuldeep Yadav removes Alex Carey. Tossed up, the Aussie keeper-batsman goes for the big slog but holes it down straight to Krunal Pandya at mid-wicket.

WICKET! Krunal Pandya does no mistake as Maxwell is bowled for 19 runs.

BOWLED 'EM! Khaleel Ahmed is on fire as he sees off D' Arcy Short for 14 runs, ensuring that the bails come off.

CAUGHT! Big wicket for Khaleel Ahmed as Chris Lynn departs. Change of pace, the batsman slashes hard but gets a top edge as Krunal Pandya takes a fine running catch in the end.

Khaleel Ahmed is on fire 🔥🔥

Picks up two crucial wickets. Lynn and Darcy Short back in the hut. Australia 35/3 in 5.3 overs.

WICKET! Aaron Finch out for a golden duck as Bhuvneshwar Kumar draws first blood for India. Wide outside off stump and the Aussie skipper nonchalantly goes for a drive that gets a thin edge.

India will look to strike the right chords and level scores with Australia while taking on the hosts in the second T20I of the ongoing three-match series here at the Melbourne Cricket Ground on Friday.

Having suffered a narrow four-run defeat at the hands of Australia in the opening match, the Virat Kohli-led side will definitely be pondering upon the areas that need to be improved.

Indian pacers Bhuvneshwar Kumar and Jasprit Bumrah did a pretty fine job with the bowl as they successfully restricted the Australian batsmen to less than 7-an-over.

But the game took a sudden turn when newcomer Khaleel Ahmed could not maintain the pressure that was built initially. Krunal Pandya, who was supposed to provide balance to the team by producing an all-around performance, failed terribly on the day conceding 55 runs in his spell of four overs.

Making the newcomers adjust to the foreign conditions and handling the pressure at the same time seems like the biggest task at hand for skipper Kohli.

Indian batting order was not at its best, either. Except for opening batsman Shikhar Dhawan, no other player could contribute enough to take their side home. Small cameos from Dinesh Kartik (30 off 13 balls) and Rishabh Pant (20 off 15 balls) was not enough in the end to cross the 174-run target given to India according to the Duckworth Lewis method.

India indeed missed the services of a finisher in the match. After MS Dhoni, the quest for a perfect finisher is still on and it is definitely not a cup of tea for any player to fit in the shoes of one of the best finishers in the cricketing world.

Australia, on the other hand, rose to the occasion right when it was needed. Constantly facing media scrutiny over their disappointing performance after the ball-tampering saga, the hosts must have got a much-needed boost to their morale. Their batsmen did a commendable job to take Australia to a respectable total.

Bowling, however, remains a concern for Australia as most of their pacers proved expensive on the day. But a brilliant spell from spinner Adam Zampa did the job for them.

A win in the T20 series is crucial for both the sides as they would be heading to a grueling four-match Test series. The format is entirely different but a winning momentum is always a bonus. (with agency inputs)

Where to watch the matches live?