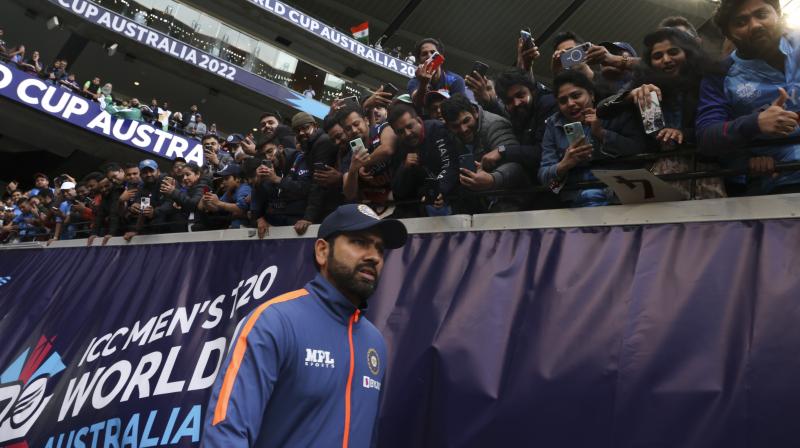 India's Rohit Sharma walks onto the field ahead of the T20 World Cup cricket match between India and Pakistan in Melbourne, Australia, Sunday, Oct. 23, 2022. (AP/PTI)

Both Pakistan and India have fielded three seamers and two spinners in their respective playing XIs.

India have preferred Dinesh Karthik ahead of Rishabh Pant in the wicketkeeper's role.

Ravichandran Ashwin and Axar Patel are the two spinners, while Bhuvneshwar Kumar, Mohammed Shami and Arshdeep Singh are the three seamers.

India and Pakistan both played one warm-up match before they started their T20 World Cup campaign. Pakistan suffered a defeat to England by 6 wickets in their warm-up match, while India defeated Australia by 6 runs.

India lost by 10 wickets to Pakistan in their group-stage encounter in the T20 World Cup last year and that played a big part in knocking them out of the tournament early.

Speaking at the time of the toss, India skipper Rohit Sharma said, "We are going to field first. Looks like a good pitch, it's always nice with overcast conditions. Think the ball will swing around a bit. Preparations have been good. We played a couple of practice games in Brisbane. Time to come out and enjoy ourselves. We were expecting nothing less than this, hopefully, we'll entertain them. We have seven batters, three seamers and two spinners."

Speaking at the time of the toss, Pakistan captain Babar Azam said, " Toss is not in our hands. We'll try to post around 160-170. We have prepared well, and we are ready for this big game. We won a series back home, and we played a tri-series in New Zealand, so we are prepared. We have three fast bowlers and two spinners."