In an eventful 33-month tenure he was witness to the 'Good, the Bad and the Ugly' of Indian cricket. 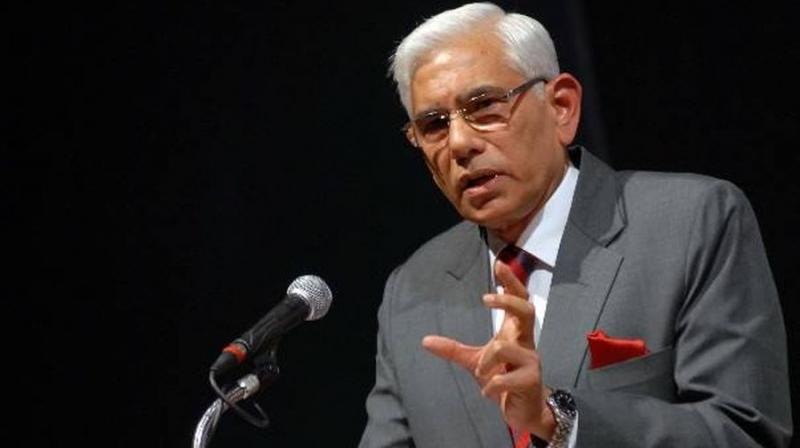 Vinod Rai is happy that someone of Sourav Ganguly's stature is taking over the reins of Indian cricket. (Photo: File)

New Delhi: After an eventful 33-month tenure, during which he was witness to the "Good, the Bad and the Ugly" of Indian cricket, Committee of Administrators chief Vinod Rai is happy that someone of Sourav Ganguly's stature is taking over the reins of Indian cricket.

Having cut off the "umbilical cord" that tied him to the Board, the former Comptroller and Auditor General (CAG) spoke to PTI on a range of issues from "giving a free hand" to the Virat Kohli-Ravi Shastri duo, Anil Kumble's exit as national coach, his frosty relationship with colleague Diana Edulji, sexual harassment allegations against BCCI CEO Rahul Johri and difficulties in implementing the Supreme Court-mandated Lodha recommendations.

How do you look at Sourav Ganguly's ascension to the BCCI president's post?

Rai: I have great respect for Sourav...My respect for him grew, even more, watching him efficiently manage the Cricket Association of Bengal and the fact that cricketer of that capability and distinction will be running the BCCI. I don't think there is anyone better than Sourav to take over the reins of BCCI.

How do you look at your 33-month tenure?

Rai: It has been a very satisfying experience because there are four former players in major administration now. There is Sourav (Ganguly) as BCCI president, IPL chairman is Brijesh Patel, Anshuman Gaekwad and Shantha Rangaswamy are in the Apex Council.

We have been able to create a Players' Association, which wasn't initially being accepted. We had women's IPL, even though on a smaller scale but the matches were of high quality. We have been totally transparent. The minutes of 100-plus CoA meetings (status reports) are available on the board's website. There has been no dilution of Lodha recommendations.

You called yourself a 'Nightwatchman' but there are allegations that CoA overstayed its invitation. What went wrong?

Rai: I will tell you what went wrong. There were 92 Interim Applications (IA) filed (in the Supreme Court). Then appointment of new Amicus Curiae (PS Narsimha), who was asked to mediate and it ended only in August 2019.

About allegations that we got into administration but what is the order of the SC judgement in August 9, 2018? That we will implement the reforms and run the administration of BCCI till the general body takes over. People alleged we clung on but at the same time, dissatisfied people have gone to court saying that CoA had no business ordering the elections. I am perplexed.

What was more difficult -- handling political might as CAG or handling the BCCI 'Old Guard' while working for the CoA?

Rai: This (CoA) was no challenge at all. I had no interaction with them (the disqualified 70 plus people). They had interaction only in the court. As far as criticism and attempting to malign me is concerned, I don't care about any of those things. Anybody who was opposing reforms, I believe, had vested interest.

If I tell you to look like an outsider, doesn't Conflict of Interest rule, as per Lodha reforms, seem Draconian?

Rai: The end result, by which I mean the apex court verdict combined with our recommendations, is the most ideal solution. The cricketers have a very short playing life. They have gathered experience in the sport and why should they be denied entry as commentator, mentor or coaches of IPL teams.

There is a perception that you gave Virat Kohli and Ravi Shastri free hand. Your take on that?

Rai: Well, much can be said about it (allegation). If the head coach and the captain of the team are given freehand, in cricketing matters, what's wrong with that? I was very clear that we won't interfere in the selection process and the cricketing matters.

But in hindsight, couldn't the Anil Kumble episode (his stepping down as India coach after a fallout with Kohli) have been handled better by the CoA?

Rai: No, but I don't want to comment on that issue. I respect Anil Kumble too much, both as coach and cricketer, to get into what happened then.

Let's come to sexual harassment allegation against BCCI CEO Rahul Johri. It is widely believed that the process of enquiry wasn't correct. Could you shed some light on the matter?

Rai: I had the satisfaction of allowing principles of natural justice to apply to him (Johri) and also at the same time permitted an independent enquiry. The first complainant disappeared and we didn't even know the details of what happened.

The enquiry committee permitted two other complainants to depose their versions. Not only that, but two office-bearers also deposed.

One totally independent person from Bihar (Aditya Verma) came with an advocate and was allowed to depose. After hearing all of them, all three independent members concluded that allegations of sexual harassment against Johri could not be proven, All three said that.

But what about Veena Gowda's (an inquiry committee member) recommendations of Gender Sensitivity lessons for the CEO?

Rai: Veena Gowda, based on a certain incident that happened in the UK, said that being CEO of such a major organisation, he should undergo gender sensitisation class. Under such circumstances, how can punitive action be taken? There were allegations that enquiry was over in 15 days but that was incorrect. I kept Rahul on leave for 47 days.

Your differences with fellow CoA member Diana Edulji are well documented. What went wrong there?

Rai: We had two major disagreements -- the Johri sexual harassment case and the issue of women's head coach along with the Mithali Raj-Ramesh Powar fall-out.

I believe professional disagreements can always occur and it's ok to have an opinion. I respect her views. I cut my umbilical cord on 23rd evening. It's my principle that whenever I have left, I have left without carrying any baggage.