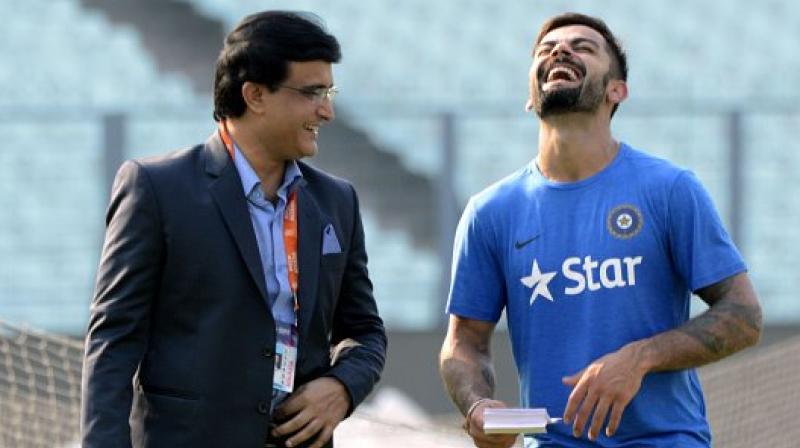 After taking charge as the BCCI boss here, Ganguly said he will be speaking to the Indian skipper on Thursday to discuss the way forward. (Photo: AFP)

Mumbai: BCCI president Sourav Ganguly on Monday called Virat Kohli "the most important man in Indian cricket" and promised the captain all possible support to make his life "easier and not difficult".

After taking charge as the BCCI boss here, Ganguly said he will be speaking to the Indian skipper on Thursday to discuss the way forward.

"I will speak to him tomorrow. He is the most important man in Indian cricket as captain of India. I look it at that way. So we will have a word with him and as I said we will support him in every possible way, he wants to make this team the best in the world. It has been a great team to be honest with the way they have played in the last three to four years," said Ganguly.

"It will be a proper discussion and everything will be mutually discussed but be rest assured, we are here to make their life easier, not make their life difficult. Everything is on the basis of performance," the BCCI president was clear.

After it became clear that Ganguly would be the next BCCI president, the former captain had spoken about India's inability to win the ICC events since the 2013 Champions Trophy. He spoke on the subject again.

"Yes you can say that they have not won a World Cup but you don't win a World Cup every time. Hopefully, we will support him, whatever he wants and we will make sure Indian cricket goes ahead smoothly."

Ganguly brushed aside any need for split captaincy after rumours started doing rounds post World Cup that Rohit Sharma will be made the white-ball captain.

"I don't think this question arises. India is winning at the moment. They are probably the best team in the world," he added.

Following India's 3-0 whitewash of South Africa in Ranchi on Tuesday, Kohli had expressed an urgent need to limit the Test venues to five to ensure a decent turnout.

When asked about it, Ganguly was non-committal on the matter.

"In terms of Test venues, we have a lot of states, lot of venues, so we will have to sit with him (Kohli) and see what he wants and take it forward."