De Kock and opener Reeza Hendricks started off cautiously as they negated the new ball attack of Deepak Chahar and Washington Sundar successfully. 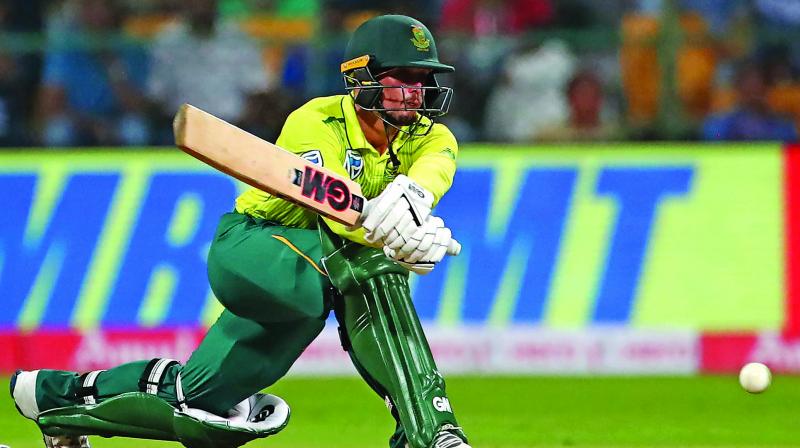 BENGALURU: Skipper Quinton de Kock (79 not out off 52) led from the front to guide South Africa to an emphatic nine-wicket victory over India in the third and final T20 at the M. Chinnaswamy Stadium on Sunday.

South Africa thus levelled the series 1-1.  The visitors chased down the target of 135 with 19 balls to spare. Beuran Hendricks was adjudged the Man-of-the-Match for his economical spell of 4-0-14-2 and de Kock won the Player of the Series award for making 131 runs in two innings.

De Kock and opener Reeza Hendricks started off cautiously as they negated the new ball attack of Deepak Chahar and Washington Sundar successfully.  Navdeep Saini’s introduction made things easier for de Kock. Saini leaked 15 runs in his opening over. In a way, the expensive over set the tone for South Africa’s convincing chase.

Things got worse when India made a mess of the DRS review. Virat Kohli exhausted the opportunity as he reviewed an LBW decision, but Chahar’s delivery was clearly going down leg. A few overs later, de Kock was plumb in front and the umpire didn’t give out, but India couldn’t do anything.

Kohli tried to make amends by taking a brilliant catch to dismiss Reeza Hendricks off Hardik Pandya. A 64-run stand between Temba Bavuma and de Kock put the match beyond India’s reach. Bavuma sealed the match with a six.

Left-arm spinner Bjorn Fortuin was welcomed with a boundary by Shikhar Dhawan. It seemed there was something in the pitch that helped the fast bowlers. But pacer Kagiso Rabada found it difficult initially as he conceded 17 runs in his first over.

Beuren provided the team with the first breakthrough by removing Rohit Sharma in the third over. Rohit edged an outswinger from Beuren to Reeza who was placed at first slip.

All eyes were on Rishabh Pant who came in after Dhawan’s dismissal, at No.4. He looked  good initially but the dashing batsman once again threw his wicket away after scoring 19 runs off 20 balls.  India were 92 for five after the 13th over.