Mourinho’s side head to Southampton on Saturday in confident mood after reeling off four wins from their first five league games. 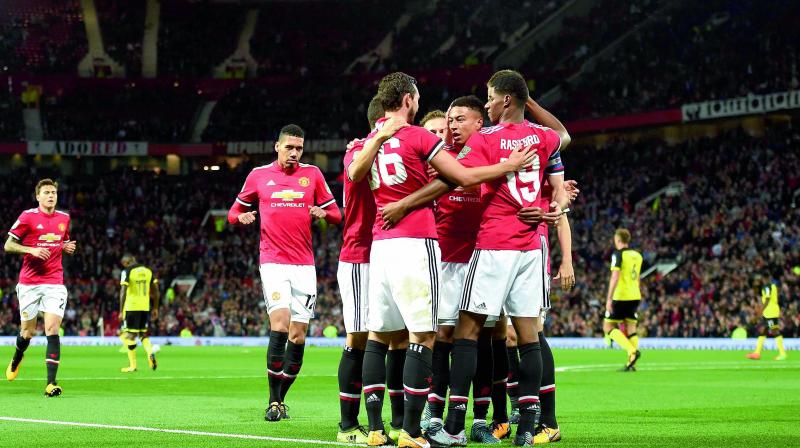 After winning four of their five EPL games this season, Manchester United will look to extend their streak against Southampton on Saturday. (Photo: AFP)

London: Jose Mourinho says Manchester United’s dynamic start to their Premier League title challenge has been fuelled by the feel-good factor among his forwards. Mourinho’s side head to Southampton on Saturday in confident mood after reeling off four wins from their first five league games.

United have already scored 16 times in the league, netting a further seven in the Champions League and League Cup. It is a goal spree that must have seemed unimaginable last season when United’s strikers were repeatedly held in check in a series of drab draws at Old Trafford.

With Romelu Lukaku scoring seven since his close-season move from Everton and Marcus Rashford and Anthony Martial also among the goals, United look capable of winning the title for the first time since 2013. Mourinho believes the key to United’s success has been his forwards playing with a more positive attitude this season.

“I think everybody in attacking areas gave a good dynamic to the team and especially happiness. We look happy playing football in this moment and that’s what I want,” he said. “They all want to play, they are all ready to play, they all want to use the minutes they have on the pitch to try and improve and have the pleasure of playing.

“I enjoy very much that commitment, that pleasure in the game.” Only Manchester City have been able to match United’s goal blitz, with Pep Guardiola’s side sitting above Mourinho’s men on alphabetical order after compiling an identical record.

Given Palace’s dismal form — they have made the worst ever start to an English top-flight season with five defeats and no goals — it would be little surprise if Aguero reaches Brook’s haul on Saturday.

But Guardiola doesn’t need to rely solely on Aguero as he also has Gabriel Jesus and Leroy Sane in fine form.

“He played so well, not just in terms of goals, his second was fantastic, but how he kept the ball,” he said. “He made a really good performance, not just the goals but in other issues he was outstanding.”

Even so, it’s been a good week for Blues boss Antonio Conte, with a League Cup thrashing of Nottingham Forest followed by news that Atletico Madrid have agreed a deal to sign Diego Costa.