India's last ICC tournament triumph was the win in the 2013 Champions Trophy. 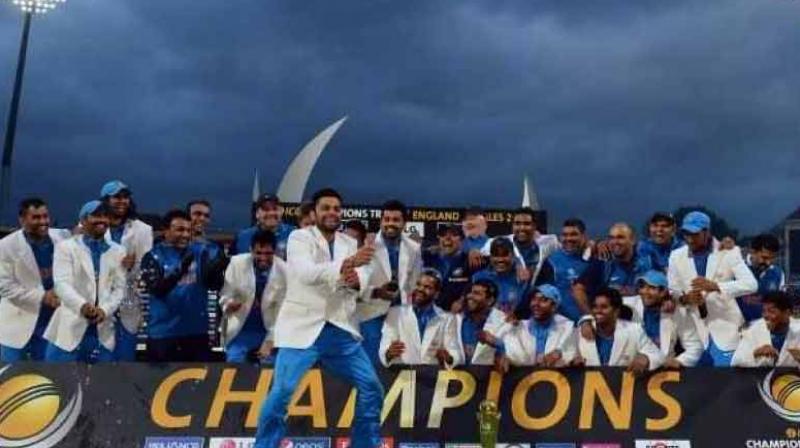 Sourav Ganguly on Friday hoped the reappointment of the familiar Ravi Shastri as head coach will help India prevail in the 'big games' and break the jinx of not winning a major ICC tournament in recent years. (Photo:AFP)

Mumbai: Sourav Ganguly on Friday hoped the reappointment of the familiar Ravi Shastri as head coach will help India prevail in the "big games" and break the jinx of not winning a major ICC tournament in recent years.

"Ravi has been around for a while, five years he's completed so he's got an extension for two more years. Hopefully now India can go all the way in the two upcoming tournaments that are coming up, which is the T20 World Cup and the Champions Trophy which has now become a T20 format," Ganguly said.

"So I hope they do well, they're doing well, they get to the semi-finals.

"In 2015 in Australia they struggled, in 2017 (2016) in Mumbai, West Indies got the better of them and even in this World Cup. So, hopefully, they will get to the next step and create a winning combination."

India's last ICC tournament triumph was the win in the 2013 Champions Trophy.

"Hopefully they can get past the big games and win trophies in the next two years," said the former captain who is not the best of friends with Shastri.

"This is one area where Virat (Kohli) needs to just be a bit more consistent -- pick players and give them a bit more opportunities consistently -- for them to get that confidence, rhythm.

"I have said that before. You saw how Shreyas Iyer played in that ODI series (against West Indies), you pick him and you give him the freedom to play those matches and I think that needs to happen with a lot of players and I am sure Virat will do that," added Ganguly.

Ganguly was surprised to see chinaman Kuldeep Yadav and off-spinner Ravinchandran Ashwin being left out of the ongoing first Test against West Indies.

"But (Ravindra) Jadeja also has been in good form, the surface yesterday at Antigua needed three fast bowlers because we saw the seam movement the fast bowlers got and it was a question of the spin.

"Ashwin's record is phenomenal to leave him out in the West Indies, so it's a decision which Kohli has made and we will find out in next couple of days whether how far Jadeja goes on to pick wickets on this surface."

He praised Indian team's new batting coach Vikram Rathour for his work at the grassroots.

Ganguly said he was happy that home-bred support staff were given priority to coaches from abroad by the selection committee.

After former India all-rounder Shastri was reappointed as coach of the team, the MSK Prasad-led selection panel opted for Rathour, Bharat Arun and R Sridhar as the batting, bowling and fielding coach respectively.

"I am extremely happy that our own home bred coaches are given priority which is good because they have put in a lot of effort. With Indian coaches, communication (with the players) is good, they understand the mindset (of the players). This country has produced some great players," he said.

"India us No. 1 cricketing county in the world. I am not saying just in terms of the money they generate, but also that a number of people play the sport, players attached to the game. I am happy that the likes of Ravi (Shastri), Sridhar, Vikram (Rathour), Bharat Arun have got the opportunity to take Indian cricket forward because they got as much ability as anybody else in the world," Ganguly added.

Asked about Jonty Rhodes not even being included in the shortlist for the job of fielding coach, he said, "They wanted continuity with Sridhar, who I think has done a good job. The Indian fielding is very good. You saw that in World Cup with Ravindra Jadeja leading the pack."