Boult took two early wickets in one over after Sri Lanka resumed the day on 85 for two at Colombo's P. Sara Oval. 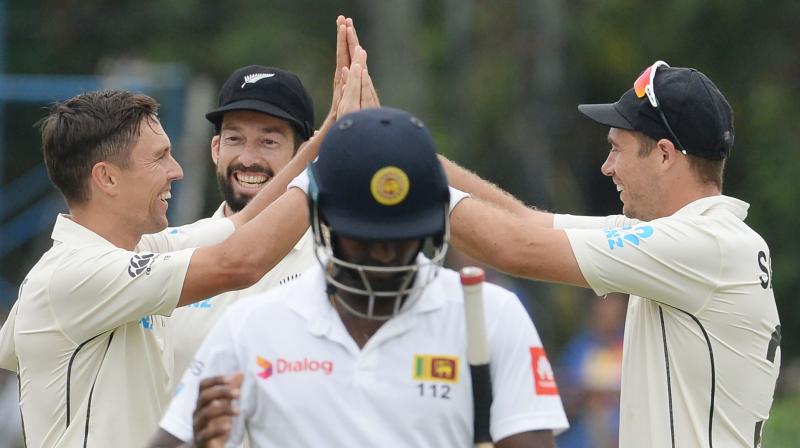 Boult took two early wickets in one over after Sri Lanka resumed the day on 85 for two at Colombo's P. Sara Oval, where the start was delayed due to a wet outfield. Sri Lanka were 144 for six at lunch with Dhananjaya de Silva, on 32, and Dilruwan Perera, on five, at the crease.

Southee, like Boult, also delivered a double-wicket maiden as the duo put on a superb display of seam bowling under overcast conditions. Boult got overnight batsman Angelo Mathews caught behind for two to reach a landmark of 250 Test wickets -- only the third Kiwi bowler to achieve the feat.

He trapped Kusal Perera lbw for nought after just three balls as Sri Lanka slipped to 93-4 and would have been in further trouble had Boult held on to a simple catch from de Silva off his own bowling a few overs later.

Karunaratne also got a lifeline on 61 when Kane Williamson could not grab a tough chance at short mid-wicket off Ajaz Patel. But the left-hander, who completed his 23rd Test fifty after resuming the day on 49, soon fell, caught behind off Southee for 65.

Southee struck again in the same over to send Niroshan Dickwella trudging back to the pavilion for nought. Perera then played out the rest of the session with de Silva.

Medium-pace bowler Colin de Grandhomme and spinner William Somerville took a wicket each on the opening day after Sri Lanka elected to bat first.
Weather permitting, extended playing time is planned for the day after only 36.3 overs were possible on Thursday due to rain in the Sri Lankan capital.