All-rounder Stokes was out for eight and England were 34-4 in the 15th over. 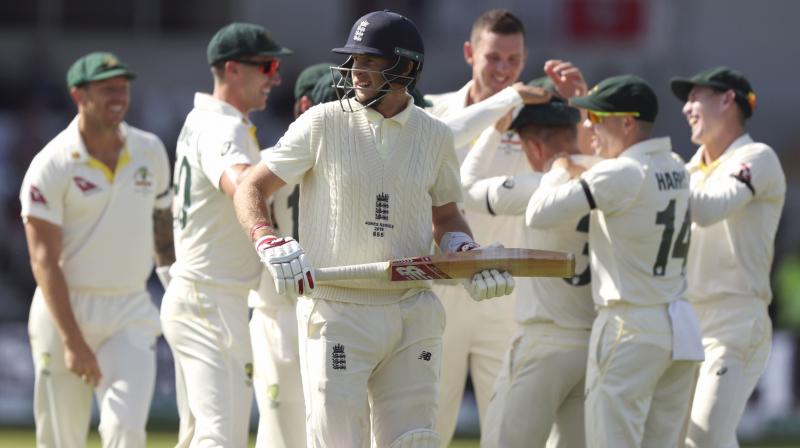 England captain Joe Root fell for his second successive duck as his side slumped to 34-4 against Australia on the second day of the third Ashes Test at Headingley on Friday. (Photo:AP/PTI)

Leeds: England captain Joe Root fell for his second successive duck as his side slumped to 34-4 against Australia on the second day of the third Ashes Test at Headingley on Friday.

But even though the blue and sunny skies above Headingley on Friday ought to have made life easier for batsmen, there was always the chance that England's fallible top-order would be undone by Australia's fast bowlers and that proved to be the case.

World Cup-winning opener Jason Roy, new to Test cricket this season, took guard having made just 40 runs in four innings this series. He fell for nine in familiar fashion on Friday when he edged a drive off a wide ball from Josh Hazlewood outside off stump to David Warner at first slip.

His exit saw Root come into warm applause on his Yorkshire home ground. But Root, arguably England's best batsman, was out for a second ball nought when he was undone by a straighter Hazlewood delivery that seamed away a touch, with Warner holding another good catch in the cordon. Hazlewood had taken two wickets for no runs in three balls, with England now 10-2.

- Golden duck -
It was Root's second straight nought after he was out for a golden duck in the second innings of the drawn second Test at Lord's. England were almost 10-3 when new batsman Joe Denly was given out lbw to Hazlewood on nought by umpire Joel Wilson.

But Denly reviewed and with replays showing the ball would have gone well over the top of the stumps West Indian official Wilson, who had a record-equalling eight decisions in a Test overturned in the series opener at Edgbaston, had to reverse his original verdict. England, however, were 20-3 when Rory Burns was caught behind for nine by Australia captain and wicket-keeper Tim Paine after the left-handed opener gloved an intended hook off a Pat Cummins bouncer.

All-rounder Ben Stokes came into this match on the back of an unbeaten 115 at Lord's. But with England desperately needing him to settle in and repair the situation before going on the attack, he flat-footedly carved at a wide half-volley from recalled fast bowler James Pattinson he could barely reach, with Warner taking another good slip catch as he held a fast edge high above his shoulder.

All-rounder Stokes was out for eight and England were 34-4 in the 15th over.
Ashes-holders Australia, bidding for their first Test series win away to England in 18 years, lead this five-match series 1-0 after a 251-run win in the first Test at Edgbaston.