Ashes 2019: Archer's fifer bundles out Australia on 179 in third Test

Australia suffered an early blow as Harris (8) and Usman Khawaja (8) were departed early by Archer and Stuart Broad, respectively. 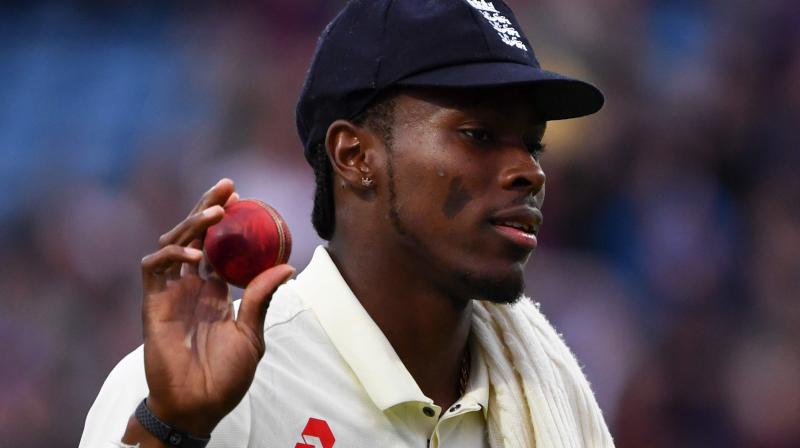 Labuschagne was the highest scorer from the Australian side and was scalped by Ben Stokes. (Photo: AFP)

Leeds: Pacer Jofra Archer's maiden fifer helped England to restrict Australia at 179 runs after the end of play on day one of the third Ashes Test in Headingley Cricket Ground on Friday.

England won the toss and opted to ball first. For Australia, David Warner and Marcus Harris opened the innings. Australia suffered an early blow as Harris (8) and Usman Khawaja (8) were departed early by Archer and Stuart Broad, respectively.

Warner and Marnus Labuschagne stitched a 111-run partnership for the third wicket before the former was caught behind the stumps by Jonny Bairstow off Archer.

Australia again lost a couple of quick wickets as Travis Head and Mathew Wade was sent back to the pavilion on a duck. Lower middle-order failed to leave their mark as they lost their wickets early.

Labuschagne played a brilliant knock of 74 runs. He was selected in the playing eleven as Steve Smith failed the concussion test on Sunday after he was hit on his head by Archer's bouncer in the last day of the second Ashes match.

Labuschagne was the highest scorer from the Australian side and was scalped by Ben Stokes. Tailenders too failed to add some runs to the scoreboard as the whole team was bundled out for 179 in 52.1 overs.

For England, Archer returned with the best bowling figures of his Test career 6-45. Broad took two wickets while Chris Woakes and Stokes scalped one wicket each.