Wriddhiman 3.0 ready to 'shoulder' responsibility as India A take on West Indies A

Wriddhiman and Vihari the two Test specialists who have been included in the A squad to prepare for two-Test series starting late August. 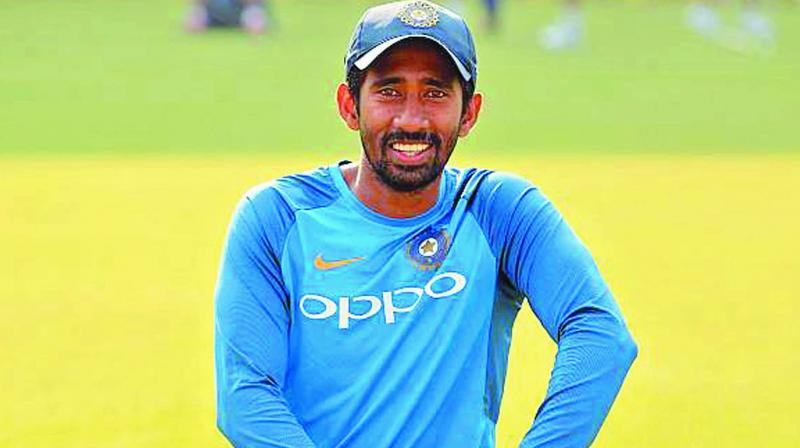 Wriddhiman, who is only three months shy of his 35th birthday, is returning after a career-threatening injury that many believe has been completely mismanaged at the National Cricket Academy. (Photo: File)

Antigua: Wriddhiman Saha will begin his reintegration after a major shoulder injury with his first first-class game in 18 months when India A take on West Indies A in an unofficial Test starting on Wednesday.

Wriddhiman and Hanuma Vihari the two Test specialists who have been included in the A squad to prepare for the two-Test series starting late August.

Wriddhiman, who is only three months shy of his 35th birthday, is returning after a career-threatening injury that many believe has been completely mismanaged at the National Cricket Academy.

It will not be out of place to label his comeback 'Wriddhiman 3.0' with the keeper-batsman beginning everything from the scratch, something that is not easy in the mid 30s.

Having stayed under Mahendra Singh Dhoni's shadow for the better part, Wriddhiman was finding his mojo in a injury-ridden career but the injury during the last IPL was a massive blow.

With Rishabh Pant proving his credentials with centuries in England and Australia, it's again that phase in his career where he could be seen wearing the orange or green bib and rushing with the towel and energy drink during breaks.

The teamman that he is, Wriddhiman will do it without batting an eyelid but the question that crops up is what exactly will be left for him post West Indies tour, when India play twin series against South Africa and Bangladesh at home.

People in the know of things are still at their wits end as to how the same kind of injury (a form of shoulder dislocation) that had K L Rahul back in action in two months, saw the Bengal stumper out for more than a year till the Mushtaq Ali Trophy.

"KS Bharath just about missed out on an India team berth. For the first time in 18 months, Wriddhiman will be keeping for a day or may be 120 overs if required. Then he will have to bat. The NCA had initially messed up his rehab and it required a surgery. It needs to be seen how it holds up," a senior BCCI official privy to developments at the NCA told PTI on condition of anonymity.

For Vihari, a good innings will keep Virat Kohli and Ravi Shastri interested for the one middle-order slot even though vice-captain Ajinkya Rahane is the favourite to take up the No 5 spot for now.

The two openers, Priyank Panchal of Gujarat and Abhimanyu Easwaran of Bengal, will like to continue their good work and keep Rahul on toes, especially after two below-par tours of England and Australia.

Bharath is expected to get a chance in the third Test and a good knock can make him the second keeper at home as the Andhra player is considered to be good keeping up to the spinners.