ICC CWC'19: 'I was waiting for a chance to play for India', says Mohammad Shami

Shami was included in the playing XI as a replacement of Bhuvneshwar Kumar, who suffered an injury in the last match against Pakistan. 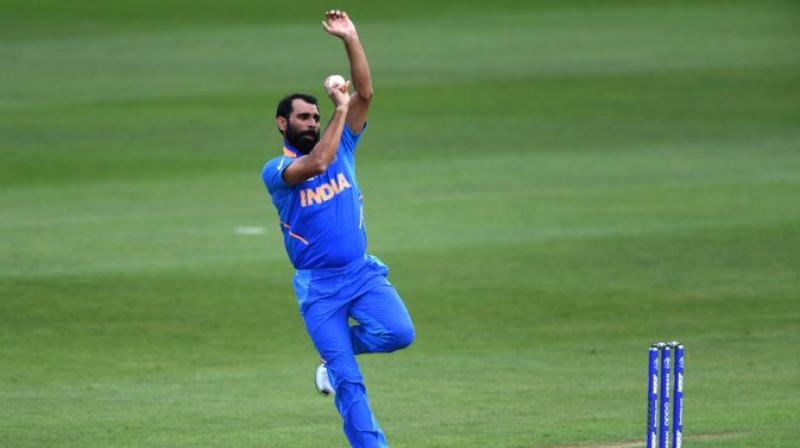 Shami bowled the last over of the game and took a hat-trick while giving away only four runs. (Photo: Cricket World Cup / Twitter)

Southampton: Indian pacer Mohammad Shami after taking a hat-trick in his first match of the ongoing ICC Men's Cricket World Cup on Saturday said that he was waiting for his chance to play for India and showcase his skills.

"I was waiting for my chance to play in the team and finally when I got, I took a hat-trick. I'm very happy with my performance. Hat-trick happens rarely and that too in World Cup is very rare," Shami said in the post-match conference.

The 28-year-old was included in the playing XI as a replacement of Bhuvneshwar Kumar, who suffered strain in his hamstring in the last match against Pakistan.

Shami concluded his bowling with 4-40 figure. He bowled the last over of the game and took a hat-trick while giving away only four runs.

Afghanistan required 16 runs in the last over but were all out at 213 and India registered 11 runs victory.

"My plan was to ball yorker after taking two wickets on the consecutive ball and Mahi(MS Dhoni) bhai also suggested the same, I did the same and got the hat-trick," Shami said.

"The only thing in my mind while bowling last over is to execute your plans and back your skills. There is not too much option as a bowler, the more you do variation in bowling, chances are high that you will concede runs," he added.

Afghanistan gave a tough fight to India and played on their potential. They only lagged in the experience, which they are gaining in this tournament.

Earlier, Afghani bowlers bowled on good line and length and restricted India to 224. The wicket was difficult for batting in the first inning and as the game progressed it became easy for batsmen to score run.

"The wicket was much better in the second inning than first. The plan was not to bowl on the full length and keep it short as they grapple against bouncers," Shami added.

While chasing, Afghanistan displayed good batting partnerships in the top and middle order but failed to reach the target. Mohammad Nabi played a crucial knock of 52 runs.

"When Nabi was batting it felt like they can win but we knew that, if we get rid of him, we will win the match. He was the only batsman who can score runs for Afghanistan," Shami concluded.