India start their WC campaign against South Africa on June 5 but before that, they will play 2 practice matches against NZ and Bangladesh. 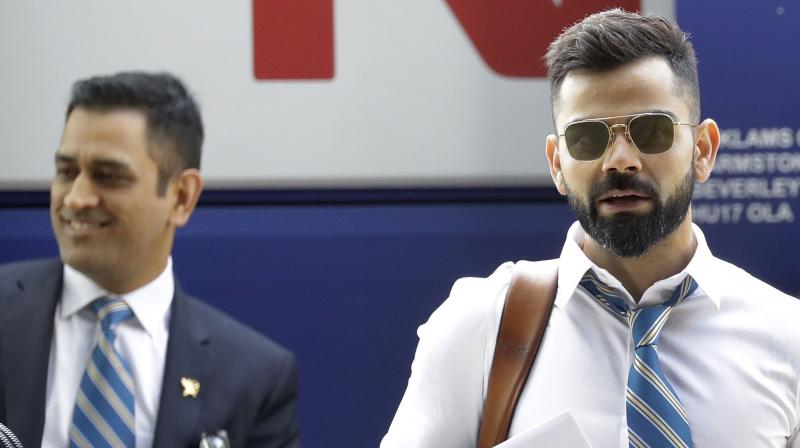 The Indian batting line-up will be steered by Number 1 ODI batsman-- Virat Kohli, who has been in sublime form lately. (Photo: AP)

Mumbai: India had their first training session in England after landing in London for the 2019 Cricket World Cup. India are being considered among the favourites to win the prestigious trophy.

India hit the nets at the Oval Cricket Ground a day after landing in London for the 2019 Cricket World Cup. All players of the 15-member squad for the World Cup played the Indian Premier League.

India start their World Cup campaign against South Africa on June 5 but before that, they will play 2 practice matches against New Zealand on May 25 and against Bangladesh on May 28.

The Indian batting line-up will be steered by Number 1 ODI batsman-- Virat Kohli, who has been in sublime form lately. Former skipper MS Dhoni, who had a poor run in 2018 has also roared back by his impressive performances for Chennai Super Kings in IPL 2019.

Getting into the groove Skipper @imVkohli for the #CWC19 #TeamIndia pic.twitter.com/LZHRnYxOyq

Some ⚽️+ BIB catching for #TeamIndia on Day 1 at the drills 💪 🔝
Mr. @yuzi_chahal at it 🎙️#CWC19 pic.twitter.com/tupMzxNQUC

KL Rahul will be facing fierce competition from Dinesh Karthik and Vijay Shankar for the number four spot of the batting line-up.

#TeamIndia all set for the first training session for #CWC19

We're here at The Oval for our very first training session for the #CWC19 #TeamIndia pic.twitter.com/8LXifLV70S

All-rounder Hardik Pandya is also expected to contribute with his batting and bowling skills in English conditions.

The bowling department will be headed by the pace-trio of Mohammad Shami, Jasprit Bumrah and Bhuvaneshwar Kumar. The spin duo of Yuzvendra Chahal and Kuldeep Yadav will also try to leave their mark in their maiden World Cup.