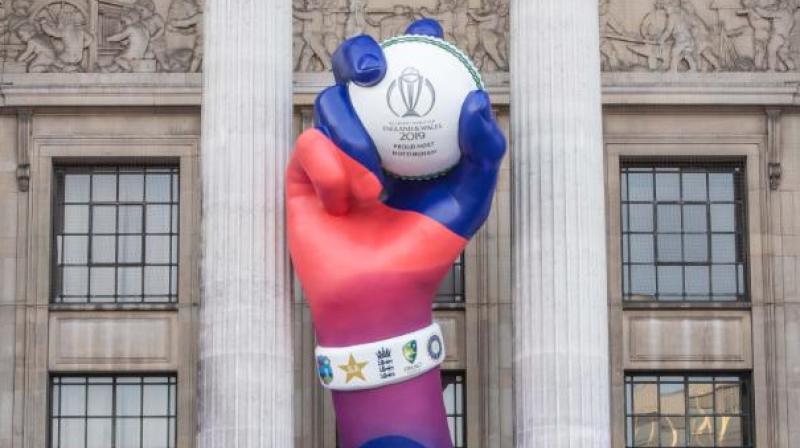 The venue will host its first match on May 31 where two-time winners West Indies will meet the 1992 champions Pakistan. (Cricket World Cup/Twitter)

In Market Square to reveal #GiantCatch for @cricketworldcup in Nottingham this morning! Look familiar? #CWC19 fanzone opens for 4⃣ days on Thursday 30th, come down for family fun and live World Cup matches on the big screen. pic.twitter.com/D9dW7Wrwjv

The venue will host its first match on May 31 where two-time winners West Indies will meet the 1992 champions Pakistan.

When a random idea 💡 in a pub comes to life 👀👀👀 #giantcatch unveiled in Nottingham today. Can’t wait for #cwc19 to get underway 1 week today 👍🏻🖐🏻 pic.twitter.com/FrgC7Nn3k9

🏏Have you seen the #GiantCatch which has appeared in Old Market Square? The 6m sculpture on the Council House marks 1 week until the @cricketworldcup 2019. #Nottingham is the only city in the world to have one - catch it while you can! #CWC19 https://t.co/eVweSmARls pic.twitter.com/evsZ4GyJ2x

Nottingham will also hold a free-to-attend Official World Cup Fanzone in Old Market Square. In the first of the tournament's Fanzones, fans will be able to watch the live broadcast of the World Cup matches from May 30 to June 2, in addition to the family-friendly cricket activities for all ages and abilities.

Director of City and Spectator Experience for the World Cup, Paul Smith said: "We are delighted to reveal this eye-catching installation in Nottingham as we fast approach the start of the World Cup. Nottingham has a real passion for sport and we are sure this will turn a few heads in the city centre when people pass by."

"We look forward to bringing the buzz and excitement of the tournament into the city through this brilliant piece of artwork but also across the four-day Fanzone which runs in the city over the first weekend of the World Cup," Smith added.

Leader of Nottingham City Council, Councillor David Mellen said: "The 'Giant Catch' Hero image coming out of the Council House will be one of the iconic images of the tournament and we are proud to be chosen as the hosts for this pivotal moment on Old Market Square. Undoubtedly, the images will be shown across the world."

"This is a wonderful opportunity to show off our city and people will be inspired to come and visit us and find out what Nottingham is really about. We are looking forward to our sporting summer in the city and this really signals the start," Mellen added.