From jaws of defeat, du Plessis sends CSK into final. 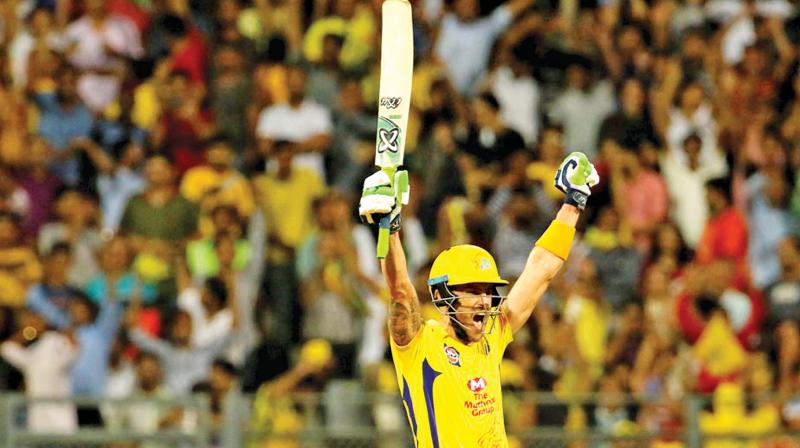 Mumbai: There were leg-side strangles, t golden ducks, a ‘dead ball or no-ball’ situation and plenty of drama as Chennai Super Kings overcame a spirited Sunrisers Hyderabad challenge to win the Indian Premier League 2018 Qualifier 1 by two wickets, chasing 139, and sealed a place in the final for the seventh time here on Tuesday thanks to a special effort from South African Faf du Plessis.

After restricting SRH to a below-par 139, CSK’s hopes of sailing past SRH’s total dealt with a major blow as Bhuvneshwar Kumar (1/14) dismissed Shane Watson (0 runs off 5 balls) in the first over before Siddarth Kaul’s (2/32) twin strikes off consecutive deliveries sent Suresh Raina (22, 13b) and Ambati Rayudu  — CSK’s leading run-getter — back in the fourth over.

Rashid Khan (2/11) then took out CSK captain Mahendra Singh Dhoni with a wrong’un that crashed into the timberto leave them tottering at 39/4 in the eighth over. At that stage, CSK would have hoped for a Dwayne Bravo special. But the Afghan sensation cut short those plans as he removed the West Indian in 12th over after Shikhar Dhawan took an easy catch in the slips. Ravindra Jadeja was the next man to go, off Sandeep Sharma’s bowling in the 13th over.

Du Plessis (67 not out, 42b), who had opened the innings alongside Watson, started to swing his bat as he and Deepak Chahar added 30 runs off 15 balls before Carlos Brathwaite took a low catch to end Chahar’s stay in the middle on the final ball of the 15thover. SRH could have sealed the game on the but a review saved du Plessis and kept CSK alive. But Harbhajan Singh fell to Rashid’s brilliance in the outfield as he caught Bhajji short of his crease in the 18th over. That over also cost SRH 20 runs, with Faf hammering 19 off them, with three fours and a six.

CSK needed 23 runs off 12 balls and while all the eyes were on Faf. Shardul Thakur (15 not out, 6b), who had conceded 20 runs in his final over, made up by smacking three fours in the 19th overs and reducing the winning target to six runs off the last six balls. Faf then made sure there was no last-over drama as he hit the first ball of the 20th over for six.