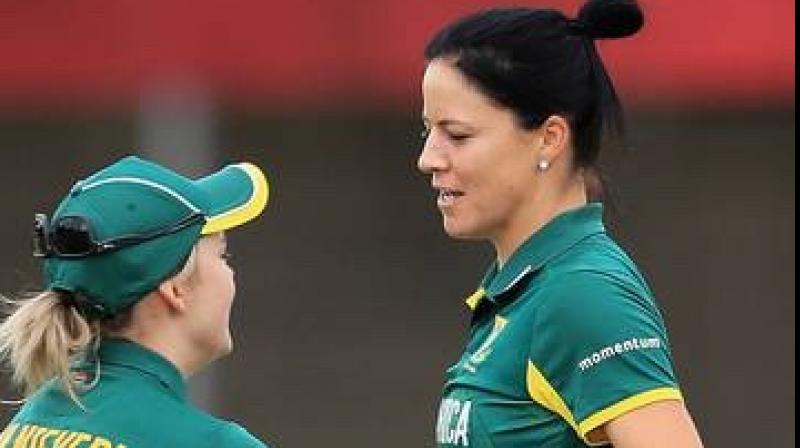 Cape Town: South Africa captain Dane van Niekerk admits she is harder on wife Marizanne Kapp than other players in the team as she is wary of accusations of favouritism towards the key all-rounder.

It is rare to find married couples in team sports and for Van Niekerk and Kapp, balancing their relationship on and off the field has needed some work over the years.

They have been team mates for the last 11 years, including for the Sydney Sixers in Australia’s Women’s Big Bash League, and were instrumental in helping South Africa to the semi-finals at the recent Twenty20 World Cup.

They married in July 2018 having made their international debuts within two days of each other in 2009, but Van Niekerk admits it has not all been plain sailing.

“She says I am tougher on her than anyone else in the team,” she told reporters in a video call on Thursday.

“We just try to set that precedent that when we are around the team, and training and playing, it is a strictly professional relationship.

“We try to manage things as much as possible. We have our fights on the field, as with anyone else, and I probably am a bit tougher on her because I want to show the team there is no favouritism.

“At the end of the day we are there to play cricket and represent our country, and we need to be professional about it. Hopefully I have managed it well enough.

“But she does get upset with me a lot on the field!”

Kapp says her obsession with the game is well balanced by Van Niekerk at home, and having her partner with her permanently on tour is an advantage other players do not have.

“I love watching cricket and speaking about the game. Dane will tell me, ‘listen, no more cricket’.

“She is the one that has tried to teach me over the last 11 years that cricket isn’t everything. Because for me it is, so I struggle a bit with that.

“But it is nice as well when you see how your team mates miss their partners and we are always lucky enough to have a person there, especially when it is not going well.”

Van Niekerk, 26, and all-rounder Kapp, 30, are two of the most sought-after players on the women’s international circuit.

They are due to line up for the Oval Invincibles in The Hundred in England later in the year, though the inaugural competition is under threat due to the Covid19 pandemic.