Sports   Cricket  23 Apr 2019  'We are targeting a spot in the semi-finals of the WC,' says Pakistan coach Arthur
Sports, Cricket

'We are targeting a spot in the semi-finals of the WC,' says Pakistan coach Arthur 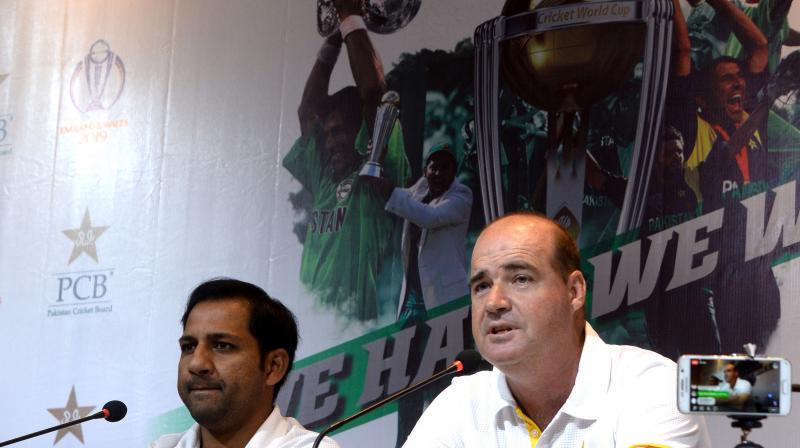 The team will play against Afghanistan and Bangladesh in the warm-ups before opening its World Cup campaign against West Indies on May 31. (Photo: AFP)

Karachi: Pakistan head coach Mickey Arthur is “targeting a spot in the semi-finals” of the ICC Cricket World Cup, beginning May 30 in England and Wales.

“We are well prepared and full of confidence. We are targeting a spot in the semi-finals of the event. We have to bring all our capabilities to produce results in our favour,” The Express Tribune quoted Arthur, as saying.

When asked about the new names- opener Abid Ali and pacer Mohammad Hasnain, Arthur said: “Abid Ali was perfect and passed his test. He and Hasnain have been in the setup only for three weeks and they have not been subjected to these standards before. Their performances have got better every time they have trained.”

Speaking on the significance of having all-rounder Mohammad Hafeez and batsman Babar Azam, the head coach said: "Hafeez will be available for us during the World Cup as an off-spinner too.

Our expectations are high from Babar Azam as he is our best batsman in the squad. We have faith in our team who will do well."

“We are going into the World Cup with all the necessary preparation and are hopeful about doing well during the event. Our batsmen and bowlers, both, are ready to give it their best shot during the event,” he said.

Reflecting on being tagged as the underdogs, the captain said, “Favourites tag has never been ideal for us, so it is good to be underdogs for World Cup”.

When questioned about the clash against arch-rivals India, scheduled on June 16, Sarfaraz said Pakistan have “beaten India in a major event recently and that gives us an advantage”.

Pakistan captain also made an announcement that he will bat in the top five positions, while all-rounder Shoaib Malik will occupy the number six position.

"We will change our batting order in England. I will bat in the above positions, top five, and Shoaib Malik will come at six,” he said.

Pakistan will leave for England on April 23. The team will play against Afghanistan and Bangladesh in the warm-ups before opening its World Cup campaign against West Indies on May 31 at the Trent Bridge, Nottingham.