Young brigade in IPL out to challenge old guard 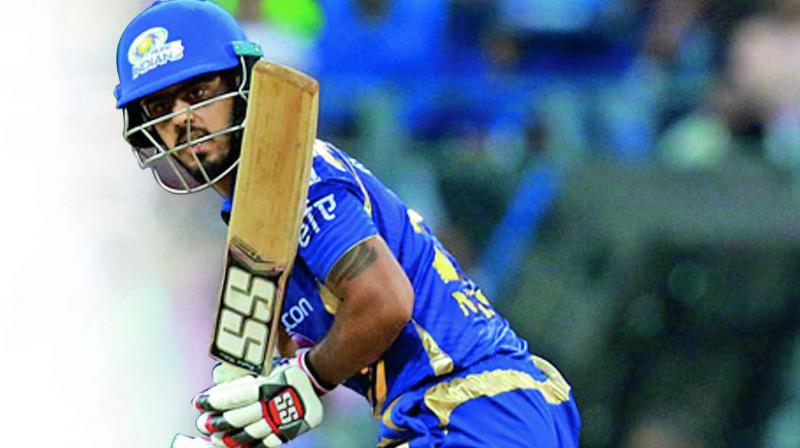 Some topsy-turvy results last week (I write this piece before Saturday’s matches) have given an intriguing twist to this IPL season. Gujarat chased down a mammoth 187 made by Kolkata. Earlier, other stragglers Bangalore and Pune too had scored impressive wins.

But beyond thrilling last over finishes and unexpected results, what’s been engaging is the keen contest between a clutch of Indian players, all eyeing places in the team to be chosen for the Champions Trophy to be played from June 1.

As I see it, barring fitness issues, there are four slots (from 15) still ‘open’. The 10 who select themselves are Kohli, Rohit, Rahane, Pandey, Dhoni, Kedar Jadhav, Ashwin, Jadeja, Umesh Yadav, Bhuvaneshwar and Shami. K.L. Rahul would have been a certainty but for slow recovery from injury.

This bunch has formed the core of the ODI team in the past year-odd. There is little reason to tinker with it. Compunctions about Dhoni’s wobbly IPL form (as yet) exist largely in the minds of fans and franchise owners, I assume and not selectors.

This gives opportunity to some batsmen and bowlers, depending on how the selectors decide on the composition after consulting chief coach Anil Kumble and captain Virat Kohli.

With all-rounders in Ashwin and Jadeja, the skew should be towards getting bowlers rather than packing the team with more batsmen. Even in limited overs cricket, getting wickets is the crux between winning and losing..

The choice would be between wrist spinners for variety (e.g. Yuzvendra Chahal, Kuldeep Yadav, Amit Mishra) along with a quickie (e.g. Ishant Sharma, Jasprit Bumrah), and/or a medium-pacer-cum-batsman who would be of value in English conditions.

But the more riveting issue is about who can fill up the batting slots because this ranges some high quality seasoned pros versus highly promising youngsters who are knocking furiously on the doors of the selectors.

Among the former are Gambhir, Yuvraj, Dhawan and Raina. All of them have a proven international track record but lost their place in the India team for reasons of form or fitness. This season they’re back in contention again and have looked in good nick in the IPL.

The young brigade challenging these stalwarts is represented by Rishabh Pant, Ishan Kishan, Sanju Samson and Nitish Rana. By the time the IPL season ends, who knows, there could be a few additions, but for the moment, these four have caught the headlines.

The first three mentioned have all played for India Under-19 teams. Indeed, Pant and Samson have got their India cap already, though haven’t established themselves. The progress of these three has followed formal protocol, as it were, though not in strict linear fashion.

For instance Samson, a few years older than Pant and Ishan Kishan, has had serious ups and downs in his short career already before coming good this IPL to remind everybody of his potential. The other two have been impressive in whatever they’ve played this season.

Of the four, Nitish Rana has been the big surprise and the biggest success in the IPL so far this year. He is an outsider in the sense that he did not graduate from the India U-19 ranks, but lacks nothing in ability or confidence for that.

Rana is the story that makes the IPL so remarkable. Picked up by Mumbai in the 2015 auction for a paltry Rs 10 lakhs, he didn’t play a single match that season, got some matches in 2016 where he made decent impact.

With explosive batting in 2017, marked by great self-belief in tough situations, he has not only got Mumbai to the top of the points table after the first fortnight, but his brilliant form now also compels national attention.

Whether the old guard can stave off the challenge from the youngsters, who finally makes the cut for the Champions Trophy will depend on how well all these players sustain form over the remainder of the IPL. The battle should be keen.

In a wider context the current situation reveals the depth in Indian cricket. All told, that perhaps is the more important takeaway.