The effect is called style and it came naturally to the son of a farmer from Karnataka who was born for cricket. 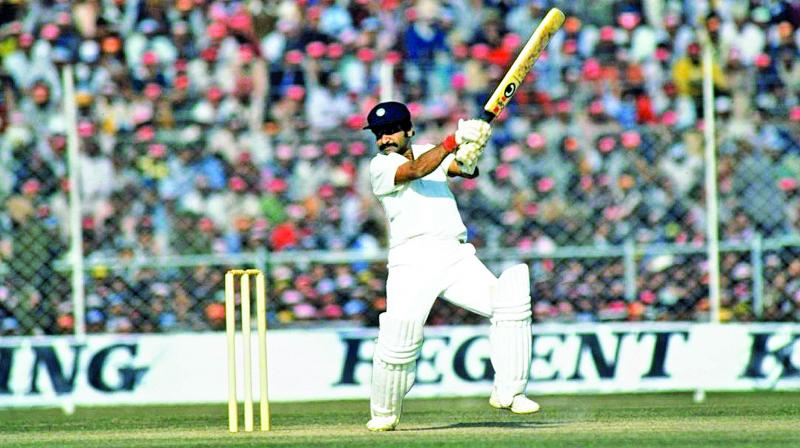 There are many great cricketers in town, including active ones belonging to the CSK and RCB squads. An array of retired greats will be there in the commentary box as well. A very special one will be joining the ranks of cricketers in the city today to receive the honorary membership from the Madras Cricket Club (1854), which takes great pride in being the very fount of Chennai cricket.

Gundappa Ranganath Viswanath was one of our childhood heroes, a batsman of such style as to bring a tear of appreciation in our eye as he played a cover drive, standing at the crease with a willow in hand and a natural at that. I once likened him to the Greek icon Athena (also Roman goddess Minerva) who descended from the head of Zeus fully armed. It seemed that way as the shortest balls aimed at the batsman sailed by him like the idle wind.

The Viswanath square drive was a thing of ethereal beauty, an aesthetic study in balance, reflexes, quickness of eye and hand and eye coordination, all of it in one smooth silken action. The effect is called style and it came naturally to the son of a farmer from Karnataka who was born for cricket. People came in droves to see him bat in the city’s grounds for South Zone, Karnataka or State Bank of India.

His wondrous touch and timing hid the power of his wrists of steel. There was no stroke in the book except maybe the hoot shot, which Viswanath did not like to play.  His cover drives off both front and back foot were exquisite strokes that kissed the turf as they raced to the fence.

Big muscular fast bowlers of various nationalities, from ‘Garth’ Mckenzie of Australia through Andy Roberts and a host of others from the Caribbean down to Bob Willis of England experienced the same fate at his hands – of their fastest balls being driven through the offside with a blade of steel as it were.

Viswanath’s 97 not out in a total of 190 at Chepauk in 1974-75 is considered one of the greatest Test innings and those who were there were fortunate to have witnessed a mastery of batsmanship against a pace trio of Roberts, Julien, Boyce and Holder on a doubtful pitch that had been virtually dug up to assist Prasanna and Bedi.

Viswanath had just shaped the impossible in top scoring in both innings with 52 and 139 at the Eden Gardens to make a narrow victory possible that drew India back to 2-1 in the series. On top of his masterful 97*, his 46 in the second innings was the second top score in the innings as India sprang back to equalise the series at 2-2, only to lose the decider in Mumbai by a big margin thanks to a big innings from Clive Lloyd.

This purple streak of Viswanath saw the series come alive against the West Indies, who were on the way to becoming the undisputed champions of Test cricket in that era. Viswanath and his brother-in-law Sunil Gavaskar scored centuries in the famous 1975-76 chase of 406 at the Qeen’s Park Oval in Port-of-Spain in Trinidad, which for long was the record successful chase in Tests.

What always stood out in Vishy’s batting was the sheer artistry of the highest calibre. Add to his batting his sporting approach and you had one of the greatest gentlemen of a gentlemen’s game. He recalled Bob Taylor in the Jubilee Test against England only to see him rescue his team and India went on to lose badly. At the end of it, Viswanath backed his decision saying he would do it every time if there was no doubt that a batsman had been wrongly given out. Let us just say that there was no greater sportsman in cricket.