The scene looked worse at the end of powerplay with England tottering at 28-2. 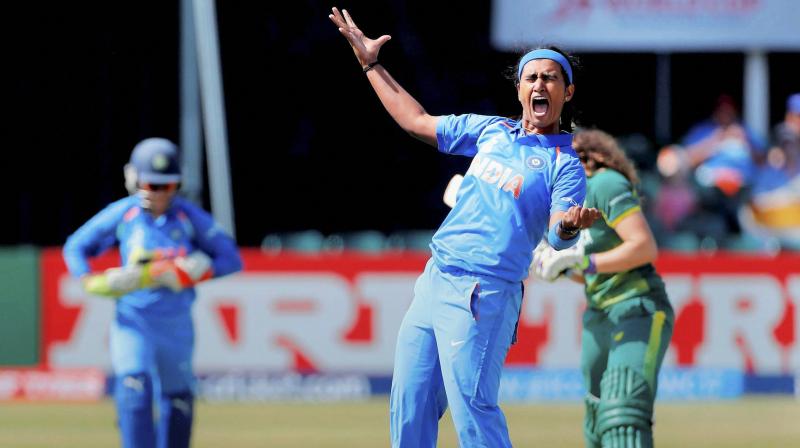 Mumbai: In a game where India’s middle-over flaws were highlighted once again, a stupendous bowling show spearheaded by Ekta Bisht saw India go one-up in the three-match ODI series against England after securing a comprehensive 66-run victory at the Wankhede Stadium in Mumbai on Friday.

With England chasing a  target of 203 after electing to bowl, Shikha Pandey drew first blood for India as early as in her first over with Amy Ellen Jones falling prey to a deadly inswinger.

The scene looked worse at the end of powerplay with England tottering at 28-2. Sarah Taylor shuffled across the off stump but was deceived by another inswinging delivery from Shikha, who wrapped up her first spell with impressive figures of 5-1-8-2.

Deepti Sharma soon joined the party after Tasmin Beaumont miscued a slog-sweep, playing against the turn to hand a dolly to Poonam Yadav at short fine-leg. But after a stuttering start, England slowly clawed their way back through captain Heather Knight and Natalie Sciver with an instrumental 73-run stand that pegged momentum back in favour of the visitors. When England looked to be running away with the game, the sudden run-out of Sciver sprung the contest back to life. Having put down Sciver earlier at mid-wicket, Bisht made amends with great awareness to break the crucial partnership.

Knight ploughed a lonely furrow despite losing partners regularly at the other end, who all failed to record double digit figures.

Even before England could even find their feet,  Bisht rattled the tail with three wickets to put an end to the script.     — PTI