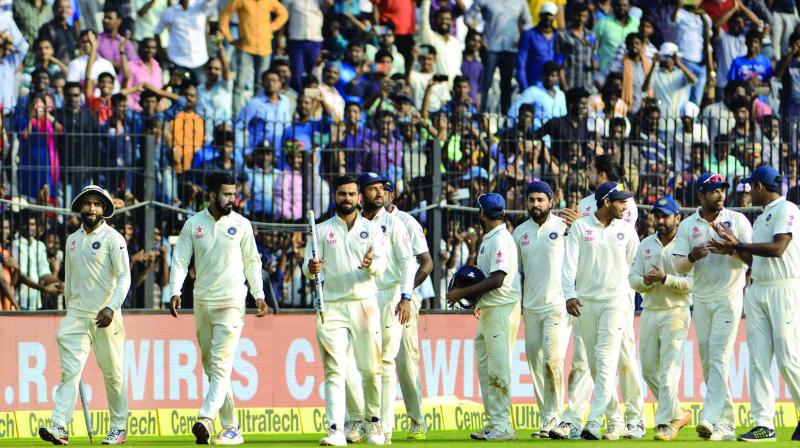 Virat Kohli leads his troupe around Chepauk for a lap of honour after defeating England in the fifth and final Test. (Photo: EK Sanjay)

Chennai: By any yardstick, it was not a turner. It was the first time the world’s No.1 bowler, R. Ashwin, went wicketless in a completed innings at home. Virat Kohli and Cheteshwar Pujara, the top two run-getters for India this year, also fell cheaply at Chepauk. India had lost their fourth toss in the five-match series and England made 477 in the first innings. In M.A. Chidambaram Stadium’s hallowed history, no visiting side has ended up on the losing side after posting more than 400 runs in the first innings. Conditions, luck, form and stats… nothing favoured India at Chepauk, yet they found a way to success.

If anything, India’s sensational win at Chennai and the 4-0 series result underlined their enviable bench strength. The performances of Karun Nair, Parthiv Patel and Jayant Yadav (centurion in Mumbai Test) are a case in point. And the magical spell by Ravindra Jadeja and the way Ashwin choked the England openers to complement his spin twin proved that Indian spinners can turn the game around even on the flattest of pitches. Not to be left out, pacers Ishant Sharma and Umesh Yadav also had their hands in plotting England’s downfall.

Except for some glaring misses in close-in fielding, India ticked all the boxes in the series and as a captain Kohli was pleased as Punch, but the team haven’t reached where he wants them to be. “Where we are now is not even a tiny bit of that. I hope the guys can keep putting this kind of effort and take the team where it belongs,” Kohli said.

In 2016, Kohli & Co. won all three Test series they have competed in. Out of 12 matches, only three ended in draws. The Port of Spain draw was forced by bad weather.

Kohli said the current Indian team never gives up the idea of winning a Test match. “We are always playing for results with the kind of cricket that we play. That’s something that crowd wants to see. They don’t want to see Test matches end in boring draws. That’s why we see so many people come and watch us play,” Kohli said.

Former India skipper Sunil Gavaskar said a healthy and young dressing room atmosphere is contributing to the team’s success. “They are all of same age group and there is no generation gap. The music that they put on in the Indian dressing room, at lunch or at the end of the day, is pretty much the one everyone loves to enjoy,” he added. 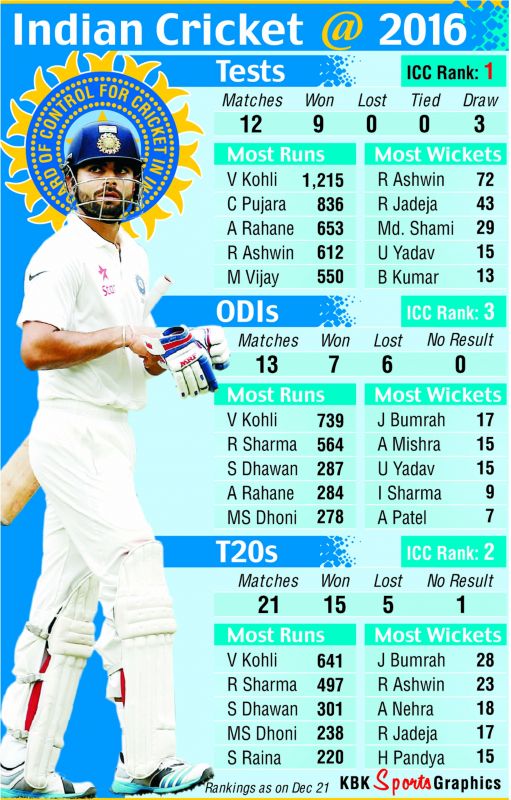 The team, indeed, feeds off on each other’s success. Kohli, as non-striker, celebrated K.L. Rahul’s hundred on day two as if he had scored it. The captain delayed the declaration on the fourth day to allow Karun complete his triple ton. Ashwin and Jadeja couldn’t stop praising each other at the post-match interview with Ravi Shastri. “It shows that the next generation will keep getting smarter looking at others, learning how it is done. What we need to do when we reach the Indian team. It is just evolution. It is sometimes surprising looking at these youngsters, how quickly they pick things up,” said Kohli.

With five series victories on the trot, Kohli’s young side is on song, but only when they travel to play in testing conditions in England, South Africa and Australia will they face the litmus test. Already there are whispers and they would only get louder when the road trip begins after five more Tests — one against Bangladesh and four against Australia — at home.