The investigation, which is ongoing, relates to plans to fix matches in South Africa's domestic Twenty20 league in 2015. 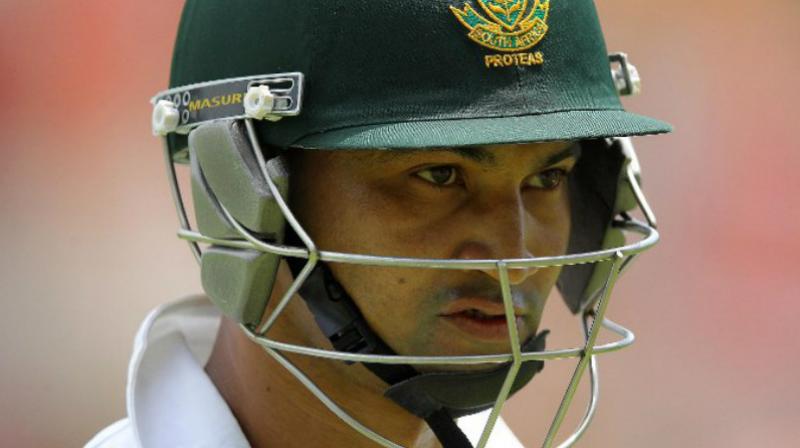 Although this scandal involving Alviro Petersen has not been on the same scale, the match-fixing investigation has revived uncomfortable memories of the Hansie Cronje case. (Photo: AFP)

Johannesburg: Former South Africa test batsman Alviro Petersen was banned for two years on Wednesday after admitting that he failed to report meetings he had with match-fixers and also concealed and destroyed evidence.

Petersen, who played 36 Tests and retired from international cricket last year, admitted to numerous charges under Cricket South Africa's anti-corruption code: He failed to disclose the meetings with fixers, failed to report corrupt activity by other players, didn't cooperate with investigators, and concealed and destroyed evidence, CSA said.

Petersen accepted the two-year ban, but charges against him of attempting to fix a match or matches and seeking bribes to fix games were dropped, CSA said.

The investigation, which is ongoing, relates to plans to fix matches in South Africa's domestic Twenty20 league in 2015.

Another former South Africa international, Gulam Bodi, was identified as the go-between who approached players on behalf of the fixers. He was banned for 20 years in January. Four other players, including former South Africa wicketkeeper Thami Tsolekile, have also been banned for between seven and 12 years and more players are believed to be involved in the case.

CSA said that while plans were made to manipulate games, it doesn't believe any fixing ultimately took place, although it cannot completely rule it out.

Petersen played for South Africa's Test team for five years from 2010-15 and was a regular opening partner to former captain Graeme Smith. He continued to play domestic cricket in South Africa after giving up internationals and is the highest-profile player caught up in the fixing probe so far.

In comments published by CSA, Petersen admitted to meeting with Bodi and unnamed "fixers," although he claimed he never had any intention to take money or fix matches. Petersen did not say why he attended the meetings.

"I now deeply regret having participated in these meetings and not to have immediately reported them to the authorities as I am obliged to do," Petersen said in the CSA statement.

"I understand that I need to take personal responsibility for my actions and I accept the punishment that CSA has imposed on me. I hope that other players will learn from my experience and be better prepared if they find themselves in the situation that I was in."

Although this scandal has not been on the same scale, the match-fixing investigation has revived uncomfortable memories of the Hansie Cronje case, when South Africa's popular national cricket captain was found guilty of match-fixing and banned for life in 2000. Cronje died in a plane crash in 2002 at the age of 32.