We didn't feel too much pressure: Josh Hazlewood

Australia bundled out Pakistan on 240 on day one of the first Test match. 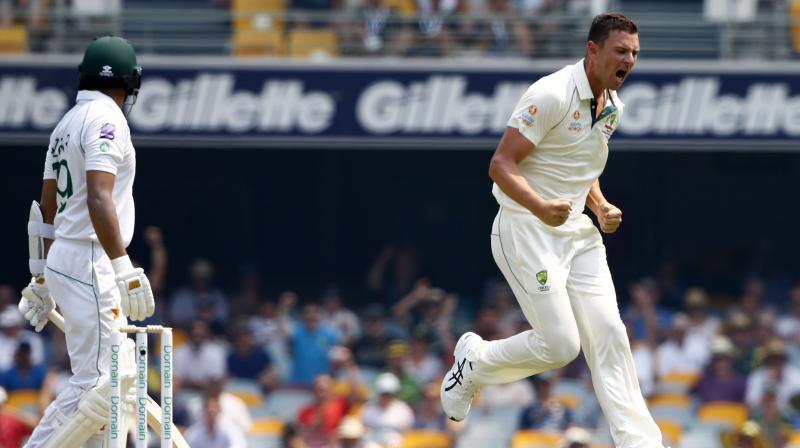 After the conclusion of day one of the first Test against Pakistan, Australia pacer Josh Hazlewood said they did not feel too much pressure. (Photo:AP)

Melbourne: After the conclusion of day one of the first Test against Pakistan, Australia pacer Josh Hazlewood said they did not feel too much pressure.

"We probably bowled too short, on the majority, especially in the first hour. All three of us played at the SCG last week, and it was the exact opposite conditions if that makes sense," Cricket.com.au quoted Hazlewood as saying.

"We got better as the day went on ... and I thought we strangled them to a degree in that first session. And while that scoreboard wasn't moving, we didn't feel too much pressure," he added.

Australia bundled out Pakistan on 240 on day one of the first Test match. Mitchell Starc picked four wickets while Pat Cummins sent three Pakistani batsmen back to the pavilion. Hazlewood clinched two wickets.

"We thought that if we could get a couple (of wickets), we could get three or four in a row, which we did. So I think that strangle mindset was certainly in effect out there in that first session," Hazlewood said.

Asad Shafiq was the highest run-getter from the visitor's side, scoring 76 runs.

Australia will start their first innings on day two.