Kohli is currently top-ranked in T20Is and has also held the top position in ODI, but has never moved above 10th place in Tests. 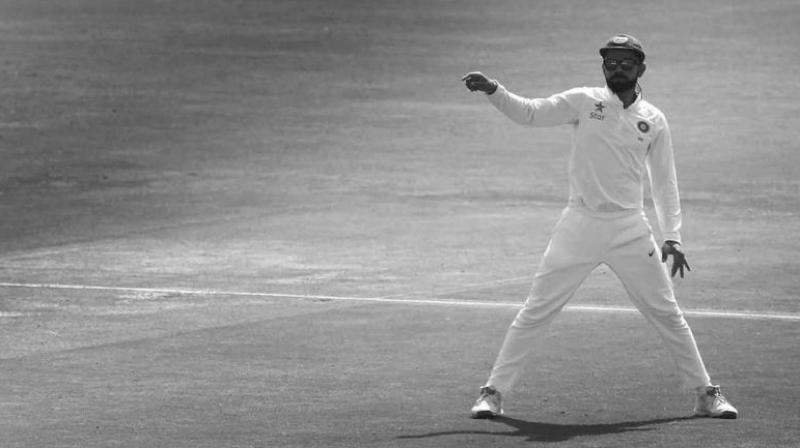 Kohli's knocks of 167 and 81 in the Vizag Test against England have helped the India Test captain climb to fourth in the ICC Test Players Rankings. (Photo: BCCI)

Dubai: India captain Virat Kohli reached a career-high fourth position in the ICC Player Rankings for Test batsmen after producing a man of the match performance in the second Test against England, which India won by 246 runs to take a 1-0 lead in the five-match series.

Kohli is currently top-ranked in T20 Internationals and has also held the top position in One-Day Internationals, but has never moved above 10th place in Tests.

However, his sublime knocks of 167 and 81 in Vishakhapatnam have helped him jump 10 slots and cross the 800-point mark for the first time, becoming only the 11th India batsman to do so.

For his efforts in Visakhapatnam, Kohli has earned 97 points. The 28-year-old from Delhi now trails second-ranked Joe Root of England by 22 points. Another strong performance in the Mohali Test, which begins on Saturday will mean he will edge closer in his quest to top the batting table.

Middle-order batsman Cheteshwar Pujara has gained one place to reach ninth rank after scoring 119 and one, while the England pair of wicketkeeper-batsman Jonny Bairstow and all-rounder Ben Stokes have also made significant gains.

For England, Stuart Broad (up one place) and Moeen Ali (up four places), have achieved fifth and 23rd positions, respectively.

New Zealand's eight-wicket win over Pakistan in a low-scoring first Test in Christchurch did not result in much upward movement for batsmen. New Zealand's Bradley-John Watling has gained two places to take 36th place, Henry Nicholls has moved up three slots to reach 79th position and debutant opener Jeet Raval has entered the rankings in 60th position after knocks of 55 and 36 not out.

In Test bowling ranking, another New Zealand player to make a fine entry was pace bowler Colin de Grandhomme, who was named player of the match for taking seven wickets in Christchurch. Grandhomme, who represented Zimbabwe in the ICC U19 Cricket World Cup 2004 in Bangladesh, has entered in 61st position.