Du Plessis was fined his entire match fee after he was caught on camera sucking a mint, and rubbing the ball with his saliva. 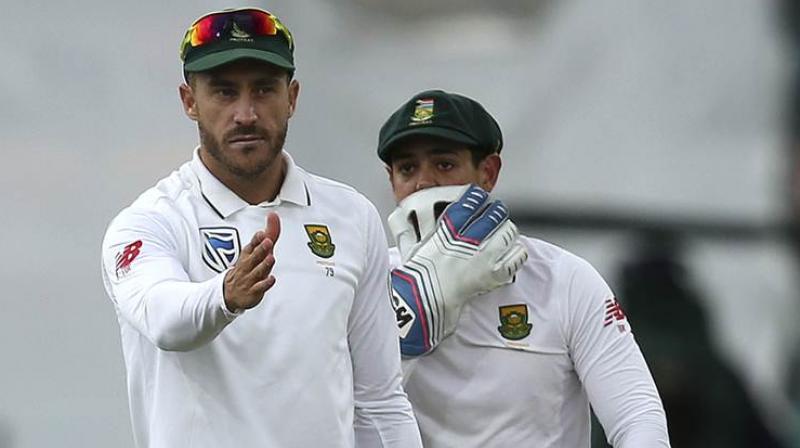 This is the second time du Plessis has been fined for ball-tampering, after he was docked 50 percent of his match fee in 2013 in the second Test against Pakistan. (Photo: AP)

Adelaide: South Africa skipper Faf du Plessis was found guilty of ball-tampering on Tuesday but was cleared to play in this week's third Test against Australia, who are fighting to avoid their first ever home Test series whitewash.

Du Plessis was fined his entire match fee after he was caught on camera sucking a sweet, or mint, and rubbing the ball with his saliva, in an attempt to alter its flight, during last week's second Test in Hobart.

"The decision was based on the evidence given from the umpires, who confirmed that had they seen the incident they would have taken action immediately," an ICC statement said.

"And from (Marylebone Cricket Club head of cricket John) Stephenson, who confirmed the view of MCC that the television footage showed an artificial substance being transferred to the ball."

The row, dubbed 'Mintgate', has proved divisive and an Australian TV reporter scuffled with South Africa's team security when he tried to question du Plessis on Monday.

This is the second time du Plessis has been fined for ball-tampering, after he was docked 50 percent of his match fee in 2013 in the second Test against Pakistan.

But Pycroft said it was treated as a first offence under the version of the ICC's Code of conduct that came into force in September.

As well as the fine, du Plessis had three demerit points added to his disciplinary record. If he collects another point within 24 months, they will be converted to suspension points and he will be banned.

Two suspension points equate to a ban from one Test or two ODIs or two T20Is, whatever comes first for the player.

The ball-tampering case has created a tense atmosphere during the tour, with South Africa accusing Australian media of "harassment" over their attempts to interview du Plessis.

Heavy defeats in the first and second Tests have plunged Australia into crisis, prompting their chief selector to quit and a dramatic team shake-up with six players axed for the day-night Test in Adelaide, starting on Thursday.