South Africa could not pose a fight against formidable India, losing all the matches by heavy margins. 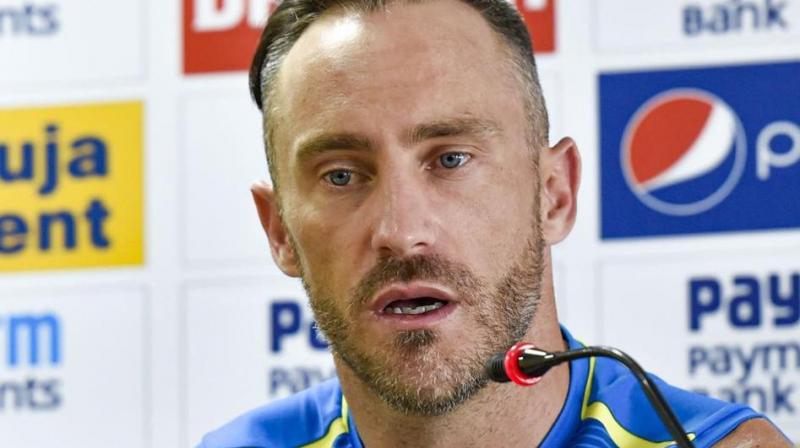 Faf du Plessis rued a lack of vision that impeded phasing out of their great players. (Photo: PTI)

Ranchi: Humiliated by a ruthless India, the South African team will go back with "mental scars" as skipper Faf du Plessis rued a lack of vision that impeded phasing out of their great players.

South Africa could not pose a fight against formidable India, losing all the matches by heavy margins.

"A tour like this reveals that there's a lot of mental scars that can happen and then obviously it's difficult to come out of that hole," Du Plessis said after they conceded their heaviest defeat to India in the third Test.

Blaming Cricket South Africa, the visiting skipper further said the tour exposed the lack of planning as they did not think for future after greats like Hashim Amla and AB de Villiers retired.

"It shows that our structures are not where they need to be. The gap between domestic cricket and International cricket. If you look back three or four years and if someone had the vision of saying, in three or four years' time there will be a lot of inexperienced guys. A lot of 34, 35, 36-year-olds could possibly retire. So what do you do to make sure you get yourself ready for when that time comes?

"And possibly we are guilty of not planning or when these guys going at the same time. And now you've got to replace not only one player but four or five of your best players. Perhaps we could've been a little bit smarter in our planning phase, and the phasing out of the great players," he said.

Barring their first innings in the opening Test in Vizag, the Proteas never really troubled India in the three-Test series as their batting slumped in every match.

At Vizag, Dean Elgar and Quinton de Kock's century-plus partnership helped them post 431 in reply to India's 502 for seven declared but in Pune and Ranchi they cut a sorry figure.

"We played our best match in the first Test and the consistent pressure that was on us made us weaker every Test match that we played. That, therefore, tells me that we're not mentally strong enough as a team and that some work is required on that department."

Having lost their last series in 2015 in spin-friendly conditions, South Africa also got a big jolt as it was the Indian pace battery which came up trumps despite the absence of spearhead Jasprit Bumrah.

During the 2015 series, Indian fast bowlers only picked up a total of eight wickets across the four Tests but this time, Umesh Yadav finished the series with 11 wickets with an average of 12.18, while Mohammed Shami took 13 at 14.76 apiece.

"They were spot-on. I thought the way the Indian seamers showed us how to bowl. The pace that they bowled, the consistency that they bowled, the skill that they showed, outclassed us as a fast bowling attack. There is learning for us in that when we playing the subcontinent that our style of bowling is not successful."

Du Plessis said it was a really a tough challenge for him to see through a smooth transition as the team lacks experience.

Asked about the way forward, Du Plessis said they have to find the right people to build the side.

"It's a rebuilding phase. You have to start identifying characters that will drive the team forward. You look for personalities within a team that you see in 3-4-5-6 years to come. And then the process starts. It's a tough place to start right at the beginning.

"The process will probably take a little bit longer. So for me, our next journey now is trying to make sure that we get a lot stronger as a cricketing team mentally. So if there's work that needs to be done in that department, then so be it."