Yuzvendra Chahal’s (3/18) removal of Jonny Bairstow and Vijay Shankar in successive balls in over 16 too tilted the game in RCB’s favour. 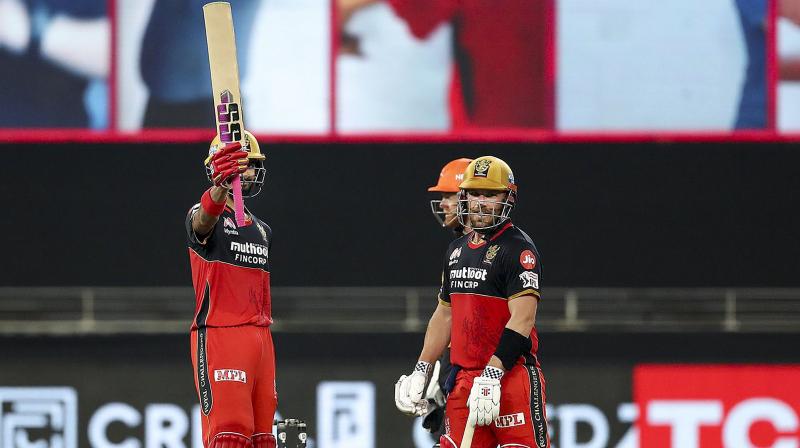 Dubai: Young opener Devdutt Padikkal starred on debut before Yuzvendra Chahal produced a crafty spell to set up a 10-run win for Royal Challengers Bangalore in their opening IPL contest against Sunrisers Hyderabad here on Monday.

Padikkal (56 off 42, 8 fours) displayed his highly rated talent with a half-century before AB de Villiers (51 of 30) provided the much needed final flourish to take RCB to 163 for five after they were sent in to bat.

The Sunrisers were on course for a comfortable chase with Jonny Bairstow (61 off 43) looking in ominous touch. Chahal (3/18) removed the Englishman and Vijay Shankar in successive balls in the 16th over to tilt the game decisively in his team's favour.

Bairstow perished in his attempt to hoick Chahal out of the park while Shankar had no clue about the perfectly placed googly.

That double blow led to a batting collapse, exposing Sunrisers' inexperienced middle-order. Mitchell Marsh suffering an ankle injury while bowling meant he came at number 10 and could only last a ball.

Earlier, the class and calmness Padikkal showed in his first high-profile game was remarkable, so much so that Australian limited overs captain Aaron Finch (29 off 27) was happy to play second fiddle at the other end.

Sunrisers pulled things back in the middle overs following a 90-run opening stand between Padikkal and Finch. De Villiers came up with crucial boundary hits towards the end to take the team score past 160.

There was also an injury scare for Australian all-rounder Marsh, who limped off the field with an ankle injury after bowling four balls in his debut game for the Sunrisers.